The incident comes a day after the BSF detected a 150-metre-long underground tunnel suspected to be used by four Jaish-e-Mohammad (JeM) terrorists for infiltration from Pakistan recently. 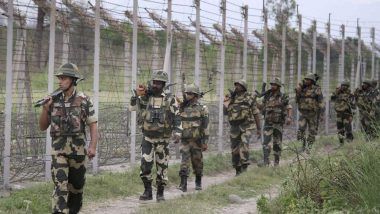 Jammu, November 23: BSF troops on Monday shot dead a Pakistani intruder along the International Border (IB) in Samba district of Jammu and Kashmir, officials said. The body is lying on the zero line and has not been retrieved yet, they said.

The officials said the incident took place in the Check Faqeera border outpost area when BSF personnel noticed some suspicious movement of a person who was trying to sneak into the Indian side from Pakistan. The intruder was challenged but he paid no heed and was subsequently shot dead, they said, adding an operation is on to retrieve the body of the deceased.

The incident comes a day after the BSF detected a 150-metre-long underground tunnel suspected to be used by four Jaish-e-Mohammad (JeM) terrorists for infiltration from Pakistan recently. Jammu and Kashmir: Second Gunfight Breaks Between Terrorists and Security Forces in Less Than 12 Hours.

All the four terrorists were killed in a gunfight when a Kashmir-bound truck, in which they were travelling, was stopped for checking at Ban toll plaza on the Jammu-Srinagar national highway on Thursday.

A huge cache of arms and ammunition including 11 A K assault rifles, three pistols, 29 grenades and six UBGL grenades were recovered from the possession of the slain terrorists, who, according to police, had come to execute a “big plan” to disrupt District Development Council polls in the UT, slated to be held in eight phases beginning November 28.