Get latest articles and stories on India at LatestLY. Bharatiya Janata Party national president JP Nadda will visit West Bengal in the first week of June where he would hold meetings with the party workers to deliberate on the strategy for the 2024 General elections. 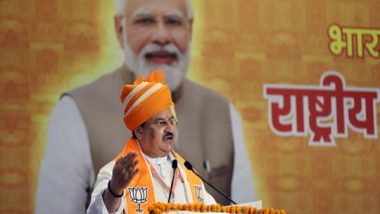 New Delhi [India], May 29 (ANI): Bharatiya Janata Party national president JP Nadda will visit West Bengal in the first week of June where he would hold meetings with the party workers to deliberate on the strategy for the 2024 General elections.

Union Home Minister Amit Shah visited the state this month for two days. The repeated visits of the BJP top leadership are seen as the party's effort to strengthen the Bengal unit.

Speaking to ANI, West Bengal BJP vice president, Saumitra Khan said that the visits by the Central leadership to the state motivate the party workers to defeat the ruling Mamata Banerjee government.

"When the Central leadership would visit Bengal, the workers of the state unit will get a big morale boost. The workers were motivated after the visit of the Union Home Minister. They have been working better since then," he said.

"The people of West Bengal also want to remove Mamata Banerjee. The party workers will get further motivation for the purpose after JP Nadda's visit," Khan added.

Elaborating on Nadda's plans after visiting Bengal, the BJP leader said that he will hold a number of meetings with the party workers.

"Nadda will hold important meetings with the party workers for the upcoming 2024 General elections. He is likely to visit the state on June 7 and 8," he said.

When asked about many BJP leaders leaving the party and joining the TMC including Arjun Singh recently, Khan said that such moves by the leaders do not make the party weak.

"I don't know why did Arjun Singh join the TMC. The TMC had lodged many false cases against him. Although, the party does not become weak with the exit of such leaders.

Nearly six Union Ministers have been given the responsibility to strengthen the organisation in Bengal. All these Ministers would soon visit the state including leaders like Smriti Irani, SP Singh Baghel, and others. (ANI)