Amit Shah Appeals to Farmers To Switch to Organic Farming

Union Home and Cooperative Minister Amit Shah on Sunday appealed to farmers to switch to organic farming as chemical fertilisers reduce land fertility and have harmful effects on human health. 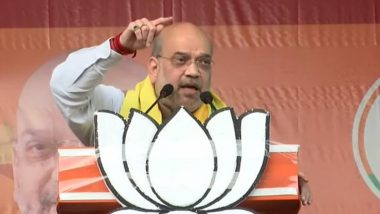 Panchmahal, May 29:  Union Home and Cooperative Minister Amit Shah on Sunday appealed to farmers to switch to organic farming as chemical fertilisers reduce land fertility and have harmful effects on human health.

Addressing a gathering of milk producers in Gujarat's Panchmahal district, Shah said the Central government is promoting organic farming and to give wings to it, Amul dairy will launch organic wheat flour, other organic products in the market, and set up laboratories to certify organic products. PM Narendra Modi Says, ‘BJP Government Tried To Shield Farmers Though Prices of Fertilizers Shot Up in Global Markets Due to Pandemic, War'

Ahead of the Assembly polls in Gujarat in December, Shah slammed Congress, saying the grand-old party has done nothing for Other Backward Class, while Prime Minister Narendra Modi-led government enacted law and created National Commission for OBC.

Later, in Nadiad, he said that the Congress had "acted to disturb the law and order".

"When the Congress was in power in Gujarat, curfews were imposed in the state for a long period of time, while it has become a thing of the past in the BJP rule," Shah claimed.

He was in Nadiad to dedicate government quarters to police personnel.

Shah virtually dedicated some 31,146 quarters for police personnel serving across the state.

"During Congress rule, it was difficult to carry out the Jagannath Yatra in a peaceful manner... Those violent elements are behind bars and now people of Gujarat can celebrate Hindu festivals be it 'Raksha Bandhan' or 'Jagannath yatra' without fear, credit should be given to the state police.

He said the state is number one in seizing narcotics in the nation.

(The above story first appeared on LatestLY on May 29, 2022 04:59 PM IST. For more news and updates on politics, world, sports, entertainment and lifestyle, log on to our website latestly.com).