Uttar Pradesh will soon be home to over 15 crore fully vaccinated individuals. This will be another milestone as Uttar Pradesh continues to conduct one of the most successful vaccination campaigns in the country since the rollout of the mass immunization drive. 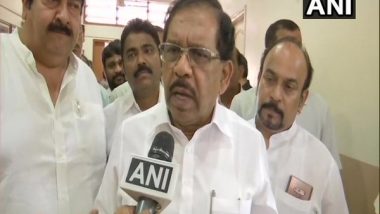 Bengaluru, May 29: Senior Congress leader G. Parameshwara on Sunday said that a Dalit leader will get an opportunity to be a Chief Minister-candidiate from the party.

Parameshwara was reacting to a the statement of Union Minister of State A. Narayanaswamy that "no one is interested in according the Chief Ministerial post to a Dalit." Karnataka Shocker: College Student Thrashed For Wearing Skull Cap; FIR Lodged Against 7

Speaking to reporters on Sunday, Parameshwara chided the Union Minister saying that with his statement he (Narayanaswamy) had made it clear that there was no opportunity for a Dalit candidate to become CM in BJP.

"He has made it clear that a Dalit leader won't become CM from the BJP. Union Minister Narayanaswamy does not have any idea on the functioning of the Congress party," he said.

"In my opinion the Congress party will give an opportunity for a Dalit to become CM. While giving his statement Narayanaswamy had taken my name and Rajya Sabha Member Mallikarjun Kharge's name. What does he know about the Congress party?" Parameshwar said. "Congress gives opportunity to all," he added.

Talking about inclusion of RSS Founder K.B. Hedgewar's speech in the syllabus, he said, there should not be an attempt to distort history. "We have blunt read, ever heard about Hedgewar taking part in the freedom movement," he stated.

Parameshwar worked as the Deputy Chief Minister during the Congress rule in the state and is prominent Dalit leader and successful industrialist in the state.

(The above story first appeared on LatestLY on May 29, 2022 04:22 PM IST. For more news and updates on politics, world, sports, entertainment and lifestyle, log on to our website latestly.com).