Get latest articles and stories on India at LatestLY. Karnataka Chief Minister Basavaraj Bommai on Friday said the Karnataka BJP core committee will meet on Saturday and will discuss the preparations for the forthcoming Legislative Council and Rajya Sabha elections. 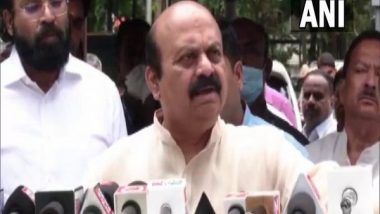 Bengaluru (Karnataka) [India], May 13 (ANI): Karnataka Chief Minister Basavaraj Bommai on Friday said the Karnataka BJP core committee will meet on Saturday and will discuss the preparations for the forthcoming Legislative Council and Rajya Sabha elections.

"We discussed other issues during the meeting with BJP State President Nalin Kumar Kateel yesterday. The issues related to Council and Rajya Sabha elections would be discussed in detail at the Core Committee meeting," Bommai said.

While 11 seats are falling vacant in Uttar Pradesh, six members each are retiring from Tamil Nadu and Maharashtra, five from Bihar and four each from Andhra Pradesh, Rajasthan and Karnataka.

Three members each from Madhya Pradesh and Odisha, two each from Telangana, Chhattisgarh, Punjab Jharkhand and Haryana, and one from Uttarakhand are also retiring.

A notification for the election will be issued on May 24 and the last date of nomination for these seats will be May 31. Polling will be held on June 10 and the counting of votes will be taken up on the same day.

The term of these members is due to expire between June to August this year.

Regarding the reservation for Backward Classes in the Local Bodies elections, Bommai said, "The BBMP election issue is pending before the Supreme Court. Reservation has to be provided for Backward Classes in Taluk and Zilla Panchayat elections legally and in accordance with the Constitution. A Commission has been constituted in this regard. We have requested for more time to get the Commission to submit its report or allow for conducting the elections as per the earlier reservation system. It is almost likely to get the nod," Bommai said. (ANI)