There is no official confirmation about the incident so far. 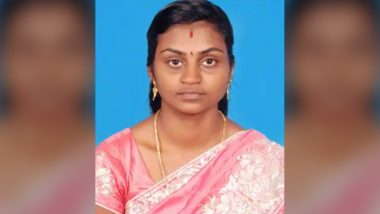 Idukki, May 11: A Keralite woman working in Israel was killed allegedly in a Palestinian rocket strike on Tuesday, her family members said here. They said the rocket fell on the residence of 31-year old Soumya in the city of Ashkelon while she was talking to her husband Santhosh, who is in Kerala, over video call in the evening.

"My brother heard a huge sound during the video call. Suddenly the phone got disconnected. Then we immediately contacted fellow Malayalees working there. Thus we came to know about the incident," Santhosh's brother Saji told P T I.

Soumya, hailing from Keerithodu in Idukki district, had been working as a housemaid in Israel for the last seven years, her relatives said. There is no official confirmation about the incident so far. Indian Woman in Israel Killed in Rocket Attack by Palestinian Militants from Gaza.

Newly-elected MLA and Nationalist Congress Kerala leader Mani C Kappan condemned the incident. In a Facebook post, Kappan, who is representing Pala seat in the Kerala Assembly, said thousands of Keralites working in Israel were living in fear. He also sought intervention of the Central and state governments in the issue.