The couple and the woman's parents later shifted to the brick kiln in Ambernath for work, an official from Ulhasnagar division's Hill Line police station said. 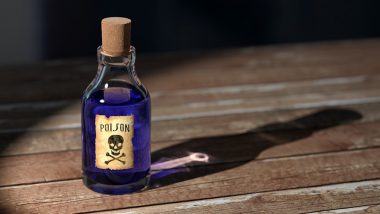 Image is for representation purpose only (Photo credits: Pixabay)

Thane, February 7: A 19-year-old tribal woman has allegedly committed suicide by consuming poison near a brick kiln in Maharashtra's Thane district after a domestic dispute, police said on Sunday. The incident took place on Friday at Vasargaon in Ambernath township, they said.

The woman, hailing from Wada taluka in neighbouring Palghar district, got married in May 2019. The couple and the woman's parents later shifted to the brick kiln in Ambernath for work, an official from Ulhasnagar division's Hill Line police station said. Odisha: Facing Extreme Poverty, Tribal Woman in Malkangiri Commits Suicide, Poisons 2 Sons.

However, the woman requested her husband to return to her native place, but he asked her to wait for some more time. The couple used to be frequent quarrels over the issue, the official said.

On Friday, the woman allegedly consumed poison at their home near the brick kiln. She was rushed to a hospital where she died the same day during treatment, he said. The police have registered a case and are conducting a probe into it, he added.