I will meet the President and the Prime Minister if given an appointment." 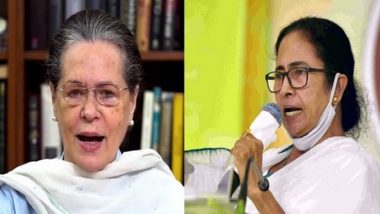 New Delhi, July 27: West Bengal Chief Minister Mamata Banerjee, who is in the national capital for the first time since her victory in the assembly elections, is likely to meet Congress interim president Sonia Gandhi on Wednesday. The meeting will take place around 4:30 pm at Gandhi's residence at 10 Janpath.

Banerjee landed in Delhi on Monday. Earlier today, she met Congress leaders Kamal Nath and Anand Sharma. Speaking to the media after the meeting, Sharma said, "Mamata Banerjee and I have close ties as we have worked together for years. I appreciate her for how she fought the recent polls and won. She has come to Delhi for the first time after victory, so I came and had tea with her."

Briefing media persons, West Bengal Chief Minister had said, "I will go to Delhi during the Parliament session and meet some leaders there. I will meet the President and the Prime Minister if given an appointment."

Banerjee's visit during the ongoing Parliament's Monsoon session holds significance as the Opposition is cornering the BJP-led NDA government on a range of issues including price rise, increasing cost of diesel and petrol, and issues related to tackling the COVID-19 pandemic.

There is also a standoff between the Centre and Opposition parties over several key issues including the alleged Pegasus snooping controversy and scrapping of farm laws.