Section 144 of the CrPC, prohibiting assembly of five or more people at one spot, will be in force during the period, Chief Minister Uddhav Thackeray said. 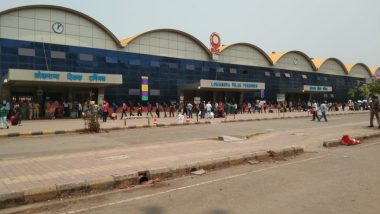 Mumbai, April 14: Several people gathered outside the Lokmanya Tilak Terminus here on Wednesday to board long- distance trains, a day after the Maharashtra government announced severe restrictions on public movement to check the spread of COVID-19. The Central Railway (CR) appealed to people not to panic and avoid crowding the stations.

The Railway Protection Force and the Government Railway Police have deployed additional force outside the Lokmanya Tilak Terminus (LTT) to control the crowd. Reeling under an unprecedented COVID-19 wave, the Maharashtra government on Tuesday announced severe restrictions on public movement over the next 15 days across the state.

The restrictions, which exclude essential services, will come into effect from 8 pm on Wednesday and remain in force till 7 am on May 1. Section 144 of the CrPC, prohibiting assembly of five or more people at one spot, will be in force during the period, Chief Minister Uddhav Thackeray said.

7 special trains already left today from LTT (4)/CSMT (2) /Panvel (1) and two more in next one hour. Passengers are requested to follow all norms mandated for Covid 19. pic.twitter.com/F7ua9BDIis

On Wednesday, several people gathered outside the LTT to board long-distance trains. On Tuesday also, before the state government's announcement of fresh curbs on Tuesday, a large number of people, especially labourers, had gathered outside the LTT. Talking to PTI, the Central Railway's chief public relations officer Shivaji Sutar said people should not panic and avoid crowding the stations.

"Only passengers having confirmed tickets are permitted to board the special trains and they should reach the stations one-and-a-half hours before the train's departure time," he said. The Central Railway is constantly monitoring the waiting lists of trains and checking if there a demand for tickets to any particular destination, he added.