Heavy security was deployed by the Navi Mumbai Police at the spot. 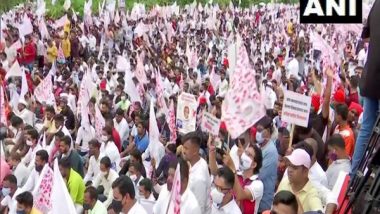 Protest over the naming of Navi Mumbai international airport (Photo/ANI)

Mumbai, June 24: A large number of people on Thursday staged a protest in Navi Mumbai over the naming of the upcoming international airport in the city.

Heavy security was deployed by the Navi Mumbai Police at the spot.

The agitators are demanding that the Navi Mumbai Airport should be named after the socialist leader, Dinkar Balu Patil, whereas, the Shiv Sena-led MVA government had earlier announced that it intends to name the airport after their founder, Balasaheb Thackeray.

Prashant Thakur, a local BJP MLA said D B Patil had "played a key role in ensuring that the farmers whose lands were being acquired for the development projects got fair compensation. His political career and his role in the struggle for rights of Other Backward Classes (OBCs) should not be overseen."

He also claimed that Shiv Sena was pushing for the naming of the airport because the party was worried that it might not be in power in the next three years when the airport project completes.

He also informed that today's protest was peaceful, however, he also added that he cannot guarantee the same for the future.