At present, the SBSP has four MLAs in the 403-member UP Legislative Assembly. 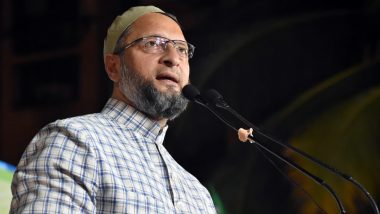 Ballia, January 13: The All India Majlis-e-Ittehad-ul-Muslimeen (AIMIM) is likely to contest the upcoming panchayat polls in Uttar Pradesh under an electoral pact with regional outfit Suheldev Bharatiya Samaj Party (SBSP).

The SBSP, headed by former UP minister Om Prakash Rajbhar, is garnering smaller and regional parties under the Bhagidari Sankalp Morcha. "Candidates belonging to Asaduddin Owaisi's party are likely to be fielded in the panchayat elections as the Morcha's joint candidate," Rajbhar told reporters here on Wednesday. Asaduddin Owaisi Says 'Muslims Are Not Kids to be Misguided' Over Mohan Bhagwat's CAA Remark.

Asked about the Morcha's stand for the upcoming UP Legislative Council polls, Rajbhar said, "The SBSP will not support the BJP." The SBSP was part of the BJP-led NDA in the state when Rajbhar was a minister till he parted ways with the saffron party following differences with Chief Minister Yogi Adityanath. At present, the SBSP has four MLAs in the 403-member UP Legislative Assembly.

Biennial elections to 12 legislative council seats in Uttar Pradesh will be held on January 30. Making light of Rajbhar, UP minister Sriram Chauhan told reporters later that the BJP will gain if Owaisi contests polls in UP. "Asaduddin Owaisi has no poll issues and if he contests the elections, then the votes will get divided, thereby benefiting the BJP," he said here.