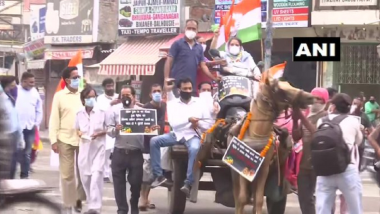 Chandigarh, June 29: The Punjab Congress on Monday held a statewide protest against the fuel price hike by the BJP-led Centre, asserting that it has dealt a major blow to the farming community. Also Read | Bihar MLC Election 2020: Sunil Singh, Kumud Verma, Sameer Kumar Singh And 6 Others Elected Unopposed to Legislative Council.

The agitating Congress leaders and workers rode horse carts with their scooters loaded on them and pulled tractor with ropes as a mark of protest against the fuel price hike and demanded from the Centre to roll back the same. Also Read | West Bengal Declares State Holiday on July 1 Which is Doctor's Day: Live News Breaking & Coronavirus Updates on June 29, 2020.

Punjab: Congress workers rode a horse cart with a scooter loaded on it to protest against rising prices of petrol and diesel, in Amritsar earlier today. pic.twitter.com/A5AvCWPxMz

Jakhar along with MLA Angad Saini, Punjab Youth Congress chief Barinder Dhillon and other local leaders pulled a tractor with ropes there. Jakhar said the continuous hike in diesel rates has put an additional financial burden on the farming community, amid the coronavirus pandemic.

“Farmers cannot afford to run tractors now with such a steep hike in diesel rates,” he said. Rather than doubling farmers' income which the BJP had promised, they are punishing them with an increase in fuel rates, said Jakhar.

“Farmers have performed exceedingly well despite the coronavirus pandemic by producing 127 lakh tonne of wheat in Punjab. Rather than giving some encouragement to them, the government is punishing them,” Jakhar said.

The protest was organised to pressurise the Centre to roll back the increase in fuel prices, he said. In Amritsar, the Congress leaders rode horse carts carrying their scooters on them it as a mark of protest. “People are already facing hardships because of the COVID-19 and now, the government has added to their woes by increasing fuel prices,” said a Congress leader in Amritsar.

They raised slogans against the Centre and demanded its rollback. Chhabra said the Centre was imposing a financial burden on people by raising fuel rates despite the crude oil prices in the international market remaining low.