In view of the upcoming Uttar Pradesh Assembly elections, Congress leader Priyanka Gandhi Vadra is likely to visit Lucknow on Monday on a week-long tour. 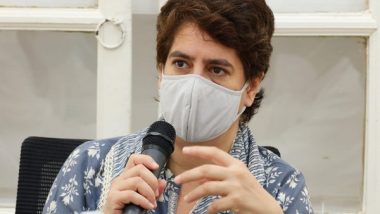 According to the sources, the All India Congress Committee (AICC) General Secretary will conduct marathon meetings with the party leaders and workers.

She will take stock of the party's poll preparedness in the state.

Earlier, the Uttar Pradesh Congress in-charge concluded her 5-day visit to the state on September 13.

Priyanka Gandhi went to Lucknow on September 9. She stayed for three days at Kaul residence on Gokhale Marg. In Rae Bareli, she stayed for two days.

Priyanka also went to Todarpur Amethi on the night of September 12 where three children died due to a wall collapse.

The major decisions that were taken during the visit including ticket distribution. Applications will be accepted from September 11 to September 26. Applications can be given in the state office and all the district offices.

Further, five Rath Yatras will be taken out in the state from September 21. The Congress Pratigya Yatra will begin with the name of 'Hum Vachan Nibhayenge', which will be 12,000 kilometres. Around 50 leaders have been given permission to contest the Assembly elections.

The Uttar Pradesh Assembly polls are scheduled to be conducted in 2022.

In the 2017 Assembly elections, the BJP won a landslide victory winning 312 Assembly seats. The party secured a 39.67 per cent vote share in the elections for 403-member Assembly. Samajwadi Party bagged 47 seats, BSP won 19 while Congress could manage to win only seven seats.