Punjab Chief Minister Captain Amarinder Singh on Thursday termed the hike in the Minimum Support Price (MSP) for paddy as "not only grossly inadequate but also an insult to the farmers who have been fighting for their rightful dues." 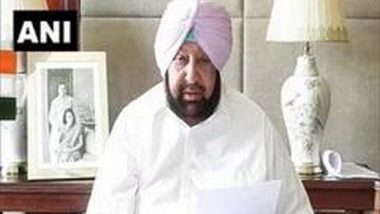 Chandigarh (Punjab) [India], June 10 (ANI): Punjab Chief Minister Captain Amarinder Singh on Thursday termed the hike in the Minimum Support Price (MSP) for paddy as "not only grossly inadequate but also an insult to the farmers who have been fighting for their rightful dues."

"As the farmers continue to put their lives on the line with their prolonged protest at Delhi borders, the Bharatiya Janata Party (BJP) led Central Government has, instead of dressing their wounds, added insult to injury with the MSP announcement," the Chief Minister said.

Pointing out that a hike of 4 per cent in MSP is inadequate to meet even the increased input costs, and citing the extraordinary hikes in diesel and other costs over the past one year Singh said that these measly hikes would only discourage farmers from going in for the much-needed crop diversification to save the precious and depleting water resource.

He also lashed out at the Central Government for adamantly refusing the Swaminathan Committee's recommendations suggesting that MSP should be "at least 50% more than the weighted average cost of production".

"Far from implementing the recommendations of the Committee in the interests of the farmers and the nation's food security, the BJP-led Government had passed the anti-farmer Farm Laws that are clearly aimed at destroying India's farmers", Singh lamented.

Also mentioning that for the Union Agriculture Minister to say that the doors for talks with farmers were open was not enough, Singh said, "The Government of India should repeal the Farm Laws and then sit across the table with the farmers to come out with genuine and meaningful reforms in agriculture in the interest of the agricultural community and the entire nation".

Stressing on the need to take the actual cost of production into account while measuring MSP, the CM said, "Government of India should simplify procurement of all agricultural produce at MSP that fully covers farmers cost plus 50% margin, as recommended by the Swaminathan Committee".

Reproving the minuscule MSP hike, he said that it exposes the Centre's anti-farmer policies and programmes. "The Government of India is increasingly becoming a bottleneck in the smooth procurement of food grains at MSP by making procedures and process more complicated and anti-farmer," he added.

Warning the Central Government of the detrimental long-term effect of its policies, Singh said that such an apathetic attitude towards the farmers, who ensured that Agriculture remained the biggest revenue earner for the Government even amid the pandemic, "could push India back into the pre-Green Revolution era, forcing us once again to pick up the begging bowl to meet the food-related needs of our people". (ANI)