After days of speculation, Pushkar Singh Dhami was elected leader of BJP legislature party in Uttarakhand on Monday, paving the way for his taking over the reins of the state for a second time. 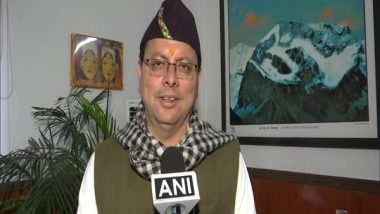 Dehradun, March 21: After days of speculation, Pushkar Singh Dhami was elected leader of BJP legislature party in Uttarakhand on Monday, paving the way for his taking over the reins of the state for a second time.

Dhami, who lost from the Khatima constituency in the Uttarakhand, led the party's poll effort as Chief Minister during the assembly polls held last month.

The results were announced on March 10 and there was speculation if he will be chief minister for a second time.

Defence Minister Rajnath Singh and Union Minister of State for External Affairs Meenakshi Lekhi were central observers for the meeting. They announced that Dhami had been elected leader by the newly-elected party MLAs.

Dhami had lost to Congress candidate Bhuwan Chandra Kapri from Khatima by a margin of 6,579 votes in the state polls. He got a total of 41,598 votes with a vote share of 44.8 per cent against Kapri who got 48,177 with 51.89 per cent votes. Dhami had won twice from the seat.

The son of an ex-serviceman, Dhami was born in 1975 in Kanalichhina village in Pithoragarh district. He holds a law degree and worked as a Rashtriya Swayamsevak Sangh (RSS) volunteer. He also had been a member of the Akhil Bharatiya Vidyarthi Parishad (ABVP).

Dhami served as the president of BJP Yuva Morcha in Uttarakhand twice between 2002 and 2008. He is believed to be a protege of former Uttarakhand Chief Minister Bhagat Singh Koshyari.

Dhami will be the 13th Chief Minister of the hill state. He belongs to the Kumaun region. The last two chief ministers before him were from the Garhwal region.

The BJP won the popular mandate for the second consecutive term in Uttarakhand and won 47 seats in the 70-member assembly.