"As per our forecast, the weather system would move nearly northward along and off the Andaman Islands towards Myanmar and adjoining south Bangladesh coast,” IMD Director said. 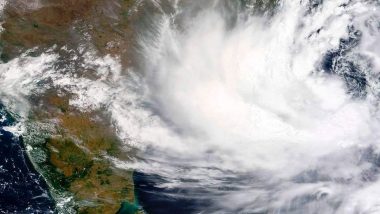 As per the weather predictions, the cyclonic storm is expected to intensify first into a deep depression and later into a cyclonic storm on Monday. Cyclone Asani To Hit Near Andaman and Nicobar Islands on March 21; Know What ‘Asani’ Means And Where This Name Came From.

"As per our forecast, the weather system would move nearly northward along and off the Andaman Islands towards Myanmar and adjoining south Bangladesh coast,” Mohapatra said on Monday.

Here Is The Live Tracker of Cyclone Asani:

A special bulletin issued by the IMD stated that the depression over the southeast Bay of Bengal and the adjoining south Andaman Sea moved north-northeastwards at a speed of 12 kmph and lay centered at 17.30 hours (5.30 pm) IST on Sunday over the north Andaman Sea.

DD over north Andaman Sea and adjoining southeast Bay of Bengal lay centered at 0830 hrs IST of today, about 120 km southeast of Mayabundar (Andaman Islands) and 560 km south-southwest of Yangon (Myanmar).To intensify further into a cyclonic storm during next 12 hrs. pic.twitter.com/OgDygjJTND

"It is likely to move nearly northwards along and off Andaman and Nicobar Islands, intensify into a deep depression during next 12 hours (by early Monday) and then into a cyclonic storm during subsequent 12 hours (by Monday evening)," the bulletin said.

The Home Ministry has deployed National Disaster Response Force (NDRF) teams at different places with all necessary equipments in order to carry out search and rescue operations. Additional teams are ready and will be airlifted if required, the Ministry of Home Affairs said.

(The above story first appeared on LatestLY on Mar 21, 2022 06:02 PM IST. For more news and updates on politics, world, sports, entertainment and lifestyle, log on to our website latestly.com).