Get latest articles and stories on India at LatestLY. Rebel Shiv Sena leader Eknath Shinde on Wednesday said that he and other dissident MLAs will arrive in Mumbai for a floor test to be held in Maharashtra Assembly tomorrow. 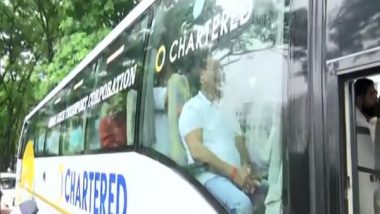 Guwahati (Assam) [India], June 29 (ANI): Rebel Shiv Sena leader Eknath Shinde on Wednesday said that he and other dissident MLAs will arrive in Mumbai for a floor test to be held in Maharashtra Assembly tomorrow.

Shinde and the other MLAs who had been staying at a hotel in Guwahati hotel for over a week now, following a revolt within the party, visited the Kamakhya temple here for the second time today.

This comes after the Maharashtra Governor called a special session in the Assembly tomorrow for Chief Minister Uddhav Thackeray-led government to prove its majority.

Rebel Sena MLA Gulabrao Patil that people are with them and they will win the Floor Test tomorrow. "There is no need for worry," Patil said.

According to sources, the MLAs will head to Goa where they will be staying today before moving to Mumbai tomorrow for the trust vote. "As many as 70 rooms have been booked in a Goa hotel," sources said.

Earlier this morning, Eknath Shinde visited the Kamakhya temple here said that his faction is ready to face the Floor Test. "I will return to Mumbai tomorrow. I prayed for the welfare of the people of Maharashtra here at the temple," Shinde said after visiting the temple.

Later in the afternoon, Shinde visited the temple again in the company of MLAs.

Maharashtra Governor Bhagat Singh Koshyari has asked the Uddhav Thackeray government in the state to prove his majority on the floor of the House on June 30 citing the "present political scenario" unfolding in the state paints a "very disturbing picture."

The Governor has written to the state Assembly secretary to convene a special session of the State Assembly tomorrow with the only agenda of a trust vote against CM Thackeray.

According to the notification, the session will commence at 11 am which will also be telecast live.

However, the Supreme Court today agreed to hear at 5 pm a plea filed by Shiv Sena chief whip Sunil Prabhu challenging Governor Koshyari's direction to CM Uddhav Thackeray to prove his majority support on the floor of the House.

Meanwhile, with just a day to go for the all-important Floor Test, former Maharashtra Chief Minister and leader of opposition Devendra Fadnavis has called a meeting of BJP leaders at his residence in Mumbai this afternoon. (ANI)