Reliance Industries Increases Supply of Oxygen to Over 700 Tonnes a Day to COVID-19-Hit States: Sources

Reliance Foundation has distributed over 67 lakh masks to frontline workers and vulnerable communities across 21 States and 2 Union Territories, sources said. 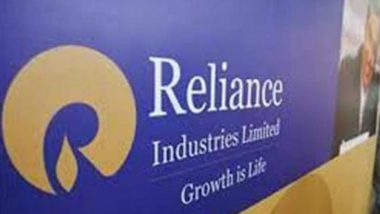 New Delhi, April 20: Billionaire Mukesh Ambani's Reliance Industries Ltd has tweaked manufacturing at its Jamnagar oil refineries to produce over 700 tonnes a day of medical-grade oxygen which is being supplied free of cost to states badly affected by COVID-19, sources said.

The company's Jamnagar refineries in Gujarat initially produced 100 tonnes of medical-grade oxygen, which has quickly been ramped up to over 700 tonnes, people aware of the matter said.

The supplies being made to states like Gujarat, Maharashtra and Madhya Pradesh will provide relief to over 70,000 critically ill patients everyday.

An e-mail sent to the company for comments remained unanswered.

"Every day nearly 700 tonnes of oxygen is being supplied to states across India. This will provide relief to over 70,000 critically ill patients daily," one of the persons said.

The entire supply of oxygen, including transportation in special tankers at minus 183 degrees Celsius is made at no cost to the state governments, sources said, adding this was a part of the company's CSR initiative.

State-owned Indian Oil Corporation (IOC) and Bharat Petroleum Corporation Ltd (BPCL) too have begun diverting oxygen produced at their refineries to supplement the availability of medical oxygen in states worst hit by COVID-19.

IOC on Monday said it has "begun the supply of 150 tonnes of oxygen at no cost to various hospitals in Delhi, Haryana and Punjab."

Separately, BPCL said it has started supply of 100 tonnes of oxygen at no cost.

Oil refineries can produce limited volumes of industrial oxygen in air-separation plants meant for nitrogen production. Scrubbing out other gases such as carbon dioxide can convert it into medical-use oxygen with 99.9 per cent purity.

Dhanraj Nathwani, Vice President, Gujarat Cricket Association and a close associate of the promoters of Reliance, in a tweet on Tuesday said: "400 tons of #oxygen is being supplied to #Gujarat by the Reliance Jamnagar, on a daily basis. This shows our commitment for Gujarat."

Reliance operates the world's largest oil refining complex at Jamnagar in Gujarat. Sources said the supply of medical-grade oxygen is another initiative of Reliance Industries and Reliance Foundation to provide relief in the ongoing pandemic.

Reliance Foundation set up the country's first COVID hospital in Mumbai in collaboration with the Brihanmumbai Municipal Corporation (BMC). The 100-bed hospital was set up in just two weeks, which was soon scaled up to 250 beds. Reliance also built a fully-equipped isolation facility in Lodhivali, Maharashtra and handed it over to the district authorities.

Besides, Reliance Foundation supported the setting up of a quarantine ward for suspected patients at Spandan Holistic Mother-And-Child Care Hospital in Mumbai. It also supported digital and medical infrastructure at Sardar Patel COVID-19 Care Centre, Delhi.

Sir HN Reliance Foundation Hospital was the first institute in Maharashtra identified by ICMR to be part of a multi-centre clinical trial to evaluate the efficacy of plasma therapy.

In addition, Reliance Foundation launched Mission Covid Suraksha, a mask distribution program, to reinforce the message of preventing the spread of coronavirus by wearing a mask. Reliance Foundation has distributed over 67 lakh masks to frontline workers and vulnerable communities across 21 States and 2 Union Territories, sources said.

The group's retail arm Reliance Retail is ensuring availability of essentials through all 736 grocery stores. Along with home delivery services for senior citizens, takeaway orders from the stores have also been facilitated so that the consumers and staff are not exposed. Telecom venture Jio has been providing uninterrupted and reliable digital connectivity to over 40 crore individuals and thousands of organisations.