The Supreme Court on Thursday adjourned the hearing of the appeal of Delhi Police challenging the Delhi High Court's order granting bail to Pinjra Tod activists in the Delhi riots case for four weeks. 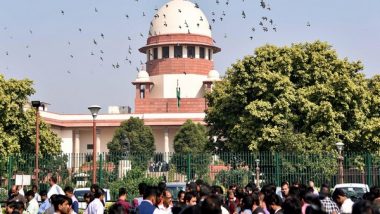 New Delhi [India], July 22 (ANI): The Supreme Court on Thursday adjourned the hearing of the appeal of Delhi Police challenging the Delhi High Court's order granting bail to Pinjra Tod activists and a Jamia student in the Delhi riots case for four weeks.

A bench of Justice Sanjay Kishan Kaul and Justice Hemant Gupta indicated that the bail of three students-activists, Devangana Kalita and Natasha Narwal, and Jamia student Asif Iqbal Tanha in the Delhi riots case may not be cancelled while stating that the bail orders should not comment on provisions of statutes. The case relates to the last year's communal violence in northeast Delhi during protests against the Citizenship Amendment Act (CAA).

During the hearing, the Bench asked Solicitor General Tushar Mehta appearing for Delhi Police if the Delhi Police was aggrieved with the bail granted to the activists or to the interpretation given to the Unlawful Activities (Prevention) Act by the Delhi High Court.

Solicitor General replying that police is aggrieved on both issues added, "We will try to convince you on both the points".

"Very unlikely, but you can try," Justice Kaul observed while stating that it's very unlikely that the apex court will set aside the bail order.

The Bench was "troubled" by the lengthy bail orders with debates about the statutory provisions.

Senior advocate Kapil Sibal, representing the three students-activists, requested the court to adjourn the case and sought permission to submit a Pendrive of the charge- sheet, as it runs to 20,000 pages.

Earlier in June, the Delhi Police had approached the apex court against the High Court order of granting them bail. The top court then refused to cancel the bail granted to three student activists in the northeast Delhi riots case but also made it clear that the High Court judgment will "not be treated as precedent by any court" to give similar relief.

The Delhi police have contended that the Unlawful Activities (Prevention) Act (UAPA) has been "turned upside down" by the High Court while granting bail in the case though the three students were arrested last May under the stringent UAPA.

The Delhi police while seeking setting aside bail verdicts has stated before the top court that the High Court "not only conducted a mini-trial but has also recorded perverse findings which are contrary to record" and almost decided the case while adjudicating bail pleas.

The High Court had on June 15 had granted bail to the three student activists saying in anxiety to suppress dissent the State has blurred the line between the right to protest and terrorist activity and if such a mindset gains traction, it would be a "sad day for democracy".

The High Court had also observed that the right to protest cannot be termed as a 'terrorist act' under the UAPA. (ANI)