According to sources, an order was issued yesterday in this regard. CRPF is in the process of withdrawing the security, they added. 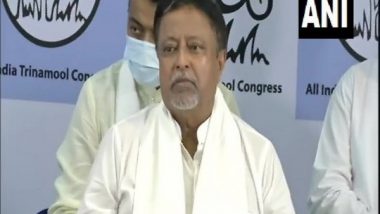 New Delhi, June 17: The security of Trinamool Congress (TMC) leader Mukul Roy has been withdrawn by Ministry of Home Affairs (MHA), said government sources on Thursday. According to sources, an order was issued yesterday in this regard. CRPF is in the process of withdrawing the security, they added.

This comes days after Roy had written to the Union Home Ministry to withdraw his security cover. On June 12, a day after rejoining TMC, Mukul Roy wrote to the Union Home Ministry seeking the withdrawal of his central security cover, according to the sources. BJP National Vice President Mukul Roy's Security Upgraded from Y Plus to Z Ahead of West Bengal Assembly Elections.

Last Month, in view of the alleged post-poll violence in West Bengal and potential threats to their lives, the central government had provided a cover of central security forces to all the newly elected 77 Bharatiya Janata Party (BJP) MLAs.

Roy, former BJP national vice president, and his son Subhranshu Roy joined the TMC in Kolkata on Friday in the presence of West Bengal Chief Minister Mamata Banerjee. This came over a month after the TMC secured a landslide victory in the state Assembly elections.