India News | Tableaux of 12 States, UTs and 9 Ministries to Be Showcased at Republic Day Parade 2022

Get latest articles and stories on India at LatestLY. A total of 21 tableaux, 12 of various states and Union Territories, nine of ministries will be showcased at Republic Day parade this year at Rajpath in New Delhi, said Nampibou Marinmai, Public Relations Officer, Defence said while briefing about on tableaux taking part in the parade. 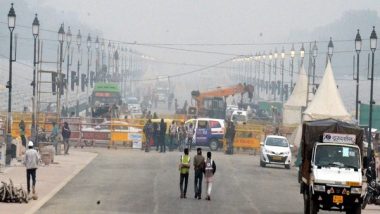 New Delhi [India], January 22 (ANI): A total of 21 tableaux, 12 of various states and Union Territories, nine of ministries will be showcased at Republic Day parade this year at Rajpath in New Delhi, said Nampibou Marinmai, Public Relations Officer, Defence said while briefing about on tableaux taking part in the parade.

12 tableaus of States and Union Territories like Gujarat, Maharashtra, Punjab, Uttar Pradesh, Goa, Meghalaya, Jammu and Kashmir, etc will participate in the parade, he added.

The tableau of Meghalaya will showcase 50 years of statehood and its tribute to women led to cooperative societies and self-help groups. The tableau showcases bamboo and cane handicrafts. The popularity of these products is testimony to the relentless efforts of women-led cooperative society and their contribution to the state economy, he stated.

While the tableau of Gujarat will showcase tribal revolutionaries of Gujarat, Goa's tableau is based on the theme 'symbols of gone heritage' showcasing various historical and natural attractions, the PRO Defence informed.

Haryana Tableau is based on the theme--'Harayana Number One in Sports'. Occupying 1.3 per cent geographical area in the country and accounting for 2.9 per cent of the population of the country. Harayana has brought laurels to the country by bringing the maximum number of medals out of the total medals won by the country in national and international sporting events including Olympics.

Uttarakhand's state tableau is based on the theme 'Pragati Ki Or Badhta Uttrakhand'. It is inspired by the progressive development and projects in the area of connectivity and religious sites.

Based on the theme 'Anglo Abor Adiverse', Arunachal Pradesh's tableau highlights the resistance of indigenous people of the state particularly of Siang region formally known as abors by the British who have bravely fought against the imperial policy of expansion of British rule in India.

Karnataka's tableau will showcase the tableau on the theme 'Credo of Traditional Handicrafts'.

Jammu and Kashmir's tableau will highlight changing face of Union Territory in the developmental scenario while Chattishgarh's tableau is based on 'Godhan Nayay Yojna' of the state.

Uttar Pradesh's tableau is based on achievements achieved through skill development and employment through ODOP (One District One Product) programme.

Punjab's tableau for the Republic day parade for 2022 is based on the immense contribution of the state to India's independence struggle while Maharashtra's tableau is based on biodiversity and bio symbols of the state. (ANI)