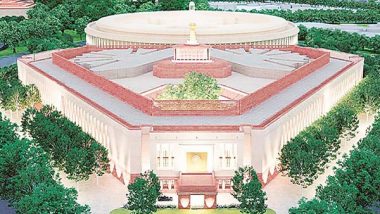 A model of the new Parliament building (File Photo)

Talking to ANI at Central Vista Avenue, Puri said that after the redevelopment, the green coverage has been increased. "Central Vista Avenue itself has been widened. Now, the walkways are of 12 to 15 kilometres. The water bodies have been cleaned. It's a new effect", the Union Minister added. Also Read | Goa Assembly Elections 2022: Congress Candidates Take Pledge To Not Quit Party After Polls.

While talking about the challenges faced during the completion of the Central Vista project, Puri said, "The meaning of challenge is that you have to meet the challenge. The challenge has been met and it has been met in a timely manner." Also Read | Republic Day 2022: Delhi To See Partly Cloudy Sky but No Rain on January 26, Says IMD.

'Despite the COVID pandemic, 4,000 people had been working round the clock. So, I am grateful to them, I am grateful to my colleague and ministry. Whenever we had required their cooperation, we got in full measure from all departments", he added.

Puri criticised the opposition parties' remarks over the Central Vista project. "First they were told that this project would not be completed in a timely manner. Second, there was some concern from the environmentalists. But we addressed everything."

According to him, out of 25 trees, 22 trees have been relocated to other places. "I am hopeful that the new Parliament building will also be complete by October this year", said the Union Minister.

It is worth mentioning that after the completion of Central Vista Avenue, additional space up to 40,000 square metres would be accessible to people. Besides this, new sidewalks have been added in place of the red sand path, resulting in 94,600 metres of walkable pathways.

"As many as 422 new stone benches have been installed. With this, there will now be 16 bridges on the canals. Amenities like restrooms have been added which will be differently-abled friendly. Tourists will also have access to a step garden where people can come and sit, said Puri.

In addition to new features, The Rajpath will now have underground stormwater drainage and a micro-irrigation sprinkler system to deal will puddles and waterlogging.

The parking facility has been increased and would now be able to house 50 buses and 1,000 vehicles at the same time. The Avenue will now have four underpasses -- 150 metres in length, at the Janpath - Rajpath crossing and C-Hexagon.