Get latest articles and stories on India at LatestLY. After Tamil Nadu Higher Education Minister K Ponmudy's statement sparked the controversy over the Hindi language, state Governor RN Ravi backed the Centre's New Education Policy (NEP-2020), saying the impression of imposition of a language is "far from the truth". 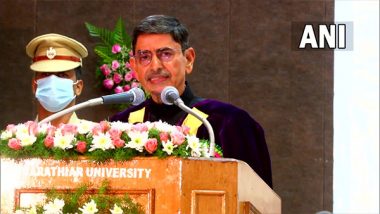 Further, he said that the NEP aims to promote teaching and learning in regional languages.

"An impression is created by some people that the Centre is imposing a language on Tamil Nadu or anyone. I think that's far from the truth. That's not correct. In fact, the whole thrust of NEP is to impart learning and teaching in regional languages, in the mother tongue...," Ravi said.

The Governor said that the people must seek justice in a language they understand.

"People who go to seek justice must get it in the language they understand. We have to encourage and enrich all the languages of this country. Tamil is a very ancient and rich language," he added.

He made the controversial statement while questioning the rationale behind the argument that learning Hindi could open more employment opportunities.

Claiming that those who speak Hindi are engaged in menial jobs here, the minister at a Convocation ceremony at Bharathiar University Ponmudy said, "If the argument that learning Hindi could open more employment opportunities was true then why are those speaking the Hindi language selling 'Paani-Puri' here?"

"Hindi is neither a national nor a link language. In the federal system, one can't impose any language forcefully," he said.

We don't have any problem learning other languages, he said. Former Karnataka CM and Leader of Opposition Siddaramaiah had said on Union HM's remark 'Hindi should be accepted as an alternative to English'.

The minister's remark came amid the raging debate over the imposition of Hindi, which erupted after a Twitter spat between actors Ajay Ajay Devgn and Kiccha Sudeep.

Bollywood actor Ajay Devgn, got into a war of words with South star Kichcha Sudeepa after the latter's comment that Hindi is no longer India's national language.

As per media reports, during an event, Sudeepa stated that "Hindi is no more a national language".

Following this, Devgan took to Twitter and expressed views on Sudeepa's comment. In Hindi, he wrote, "Kiccha Sudeep, my brother, according to you, if Hindi is not our national language then why do you release your native language [mother tongue] films by dubbing them in Hindi? Hindi was, is and always will be our mother tongue and national language. Jan Gan Man."