Following heavy rains in Telangana, Chief Minister K Chandrashekar Rao on Thursday instructed the officials concerned and public representatives to take preventive measures on a war footing as the intensity of flood is increasing in Godavari catchment areas. 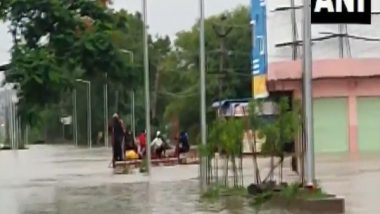 In the backdrop of heavy rains occurring in the state along with the upper neighbouring States and on the measures already taken and to be taken in the Krishna and Godavari river catchment areas, Rao held a high-level review on Thursday at Pragathi Bhavan in Hyderabad.

The Chief Minister instructed Minister Vemula Prashanth Reddy to monitor the preventive measures in the Balkonda Assembly segment and in Nizamabad district where heavy rains are occurring.

He said an effective Flood Management Team with seven officers who know how to take safety measures for the people during the floods has been set up.

"Keep the records of the floods every year. Take preventive measures during the floods based on the record of the past floods. The Team should be constituted on a permanent basis," the Chief Minister said in an official statement.

District collectors, SPs, Revenue officials, and R&B officers were directed to take preventive measures in the Godavari catchment areas so that people are not faced with any problems.

"There are very heavy rains occurring in the Western Ghats in Maharashtra, Mahabaleshwar recorded the highest 70 cms rainfall. With this, there will be an increase in flood in the Krishna River catchment areas and immediate measures should be taken," he said.

To save people from the floods, the Chief Minister instructed the deployment of more NDRF teams and helicopters. He emphasised on utilisation of the services of senior officers, both in service and retired, who worked during the floods earlier.

The Chief Minister urged people living in these areas not to venture out of their homes. He also urged them to be cautious as lakes and rivulets are overflowing and breaching due to heavy rains.

Since there is a heavy to very heavy rain forecast for the next two days, the Chief Minister reiterated that people in these areas should not venture out and exercise caution. He also urged them to take care of their own safety.

Rao also instructed the public representatives to be on high alert and take the necessary measures. (ANI)