The woman, Lakshika Sri, has been elected as a DMK councillor of ward 75 of MMC. The result was declared on February 22. 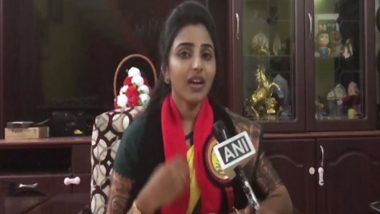 Madurai, February 23: A 26-year-old woman, who was the youngest candidate in the fray in the Madurai Municipal Corporation (MMC), emerged victorious in the recently concluded Tamil Nadu urban local body elections.

The woman, Lakshika Sri, has been elected as a DMK councillor of ward 75 of MMC. The result was declared on February 22.

Speaking to ANI, Lakshika Sri said, "I always wanted to be in an administrative service to serve the people. I had appeared in the UPSC examinations a couple of times, but could not clear it. However, I always wanted to be in public life. I decided to contest the elections after my ward was reserved for women. The DMK leaders asked me to contest the election." Tamil Nadu Urban Local Body Poll: BJP Booth Committee Member Asked To Leave After He Asks Muslim Voter To Remove Her Hijab (Watch Video).

She further said, "With the support of the people, I won the election." The newly-elected DMK councillor said, "We have formed different groups on WhatsApp to ensure that the schemes of the state government reach the needy people."