Get latest articles and stories on India at LatestLY. Vice President M. Venkaiah Naidu on Friday stressed the need to protect Indian culture and heritage, particularly the Indian musical tradition, by popularizing it among the younger generations. 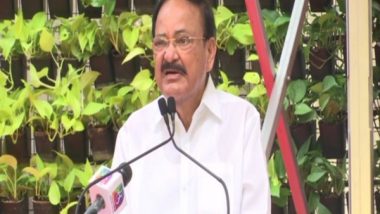 Hyderabad (Telangana) [India], May 14 (ANI): Vice President M. Venkaiah Naidu on Friday stressed the need to protect Indian culture and heritage, particularly the Indian musical tradition, by popularizing it among the younger generations.

Noting that Indian music has ancient origins and was used to transmit knowledge in the olden days, Naidu said, "music indeed has the power to relieve the mental stress and anxieties of modern life".

Naidu was speaking at the centenary celebrations of Ghantasala Venkateswara Rao, a legendary musician and playback singer in Indian films, organised by Kinnera Art Theatres in Hyderabad yesterday.

Addressing the gathering, Naidu said that Indian tradition has a special place in world music and that music was practised not just as an art form, but also as a precise science. He recalled that music is also effective as a tool for social transformation. 'Music can not only provide entertainment but can also enlighten society, he added.

On this occasion, Naidu paid rich tributes to the singer and musician, Ghantasala and said the prolific singer, along with late S.P. Balasubrahmanyam contributed immensely to the golden age of music in cinema.

He conferred the Ghantasala Memorial Award on Nagoor Babu (Mano), a renowned playback singer. Earlier, the Vice President witnessed the performances of Mano and various other artists, who gave renditions to many timeless melodies of Ghantasala.