After the India series, New Zealand will again return to Australia to play three ODIs from March 13 to 20, before featuring in a three-ODIs series at home from March 24 to 29. 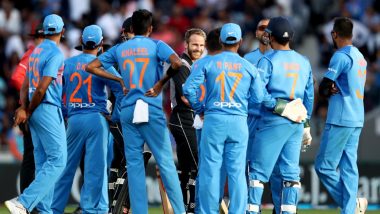 Wellington, Jun 7: India will travel to New Zealand early next year for a tour which will begin with a five-match Twenty20 series and conclude with a two-Test series. The T20I series will begin from January 24 and will be followed by a three-match ODI series. The two Test matches will be played in Wellington (February 21 to 25) and Christchurch (Feb 29 to March 4).

NZC chief executive David White said the second Twenty20, slated for January 26 -- part of a proposed festival of cricket at Eden Park -- is still subject to receiving resource consent from the Auckland Council.

"This is a notified consent process and I had really encouraged the cricket community to make submissions in support of the game, which is scheduled for India's Republic Day and is shaping up to be a wonderful occasion," White said in an NZC statement.

Ahead of the India tour, New Zealand will compete with England, playing five T20s and two Tests - the first at Bay Oval, which will become New Zealand's ninth Test venue.The Black Caps will then be hosted by Australia in a three- Test series from December 12 to January 7.

After the India series, New Zealand will again return to Australia to play three ODIs from March 13 to 20, before featuring in a three-ODIs series at home from March 24 to 29.