Ganoo, who offered prayers at the Sai baba temple here in western Maharashtra, said he has been a devotee of the revered saint for long. 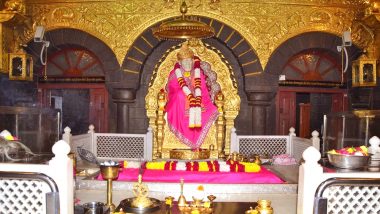 Shirdi, January 18: Mauritius minister Alan Ganoo on Thursday said he intends to set up a temple dedicated to Sai baba in his country. Ganoo, who offered prayers at the Sai baba temple here in western Maharashtra, said he has been a devotee of the revered saint for long.

"I am a devotee of Sai Baba since early 1990s and the first time I came here was in 1996 when I was the housing minister," Ganoo told PTI after visiting the temple.

"In June last year I was in opposition and elections were already on in my country when I came here to seek blessings of Baba. Shirdi Temple to Remain Shut From Tomorrow Over Uddhav Thackeray’s Remarks on Sai Baba's Birthplace.

"After elections were held in November last, I was appointed as the new land transport minister. I have many interesting experiences of Baba since I have been in his charan (feet). I intend to set up a Sai baba temple in Mauritius," he said.

A majority of Hindu population who are devotees of Sai Baba go to a small temple in Mauritius, he said.

"Today since I am a new minister in Mauritiusmy ambition is to set up a Sai baba temple and this is why I came here to seek guidance of the temple trust's chief executive officer," Ganoo said.

"When I go back home, I will proceed to make this dream of mine reality for many Mauritians," he said.