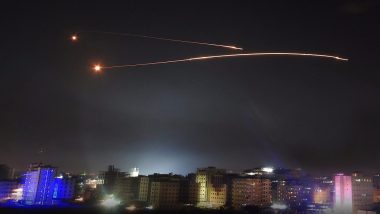 Israel carried out widespread deadly air raids against what it said were Iranian targets in Syria after its forces faced rocket fire which it blamed on Iran. The bombing has drawn global calls for restraint on both sides.

The bombardment led to calls for calm from Russia, France, Germany and Britain and the European Union, while the United States put the blame squarely on Iran and stressed Israel's right to "self-defence".

The reported exchange of fire came after weeks of rising tensions and followed U.S. President Donald Trump's decision Tuesday to withdraw from the landmark 2015 Iran nuclear deal, a move Israel has long sought. Germany and Britain joined the United States in denouncing the rocket fire towards the Israel-occupied Golan Heights they also said was carried out by Iran, while France reiterated its "unwavering support for Israel's security".

Vowing to severely hurt those trying to attack Israel, Prime Minister Benjamin Netanyahu said "Iran crossed a red line", forcing his army to strike its bases in Syria. Israeli Army and Defence Minister Avigdor Lieberman claimed that the overnight clash, the largest-ever direct clash between the Iranian and Israeli armies, was a setback to Iran's military capabilities by "many months".

The Israel Defence Forces (IDF) said the operation was in retaliation to Iran attacking Israel's northern region with a barrage of rockets. The army said four of the 20 rockets fired on Israel were intercepted by the iron dome anti-missile system and 16 fell within Syrian territory. "Iran crossed a red line. We responded accordingly. The IDF carried out a very wide-ranging attack against Iranian targets in Syria," Netanyahu said in a statement. "No rocket landed in Israeli territory and our policy is clear: We will not allow Iran to establish a military presence in Syria", the Israeli prime minister asserted.

Iran's President Hassan Rouhani told German Chancellor Angela Merkel in a telephone call that he did not want "new tensions" in the Middle East. Rouhani did not mention of Israel's strikes in Syria, or those against the Israeli-occupied Golan Heights. But the chairman of his country's parliamentary committee on foreign affairs, Allaeddine Boroujerdi, condemned the strikes, warning that "Israel has entered a dangerous game".

The Israeli raids in Syria, which a monitor said killed 23 fighters, were one of the largest Israeli military operations in recent years and the biggest such assault on Iranian targets, the Israeli military said. "We hit nearly all the Iranian infrastructure in Syria," said Defence Minister Avigdor Lieberman. "I hope we've finished this episode and everyone understood." There were no Israeli casualties.

If the rocket attacks are confirmed, it would be the first time Iran has sought to directly attack Israeli-controlled territory aside from an alleged attempted drone assault in February. "We know that comes from the Al-Quds force," army spokesman Lieutenant-Colonel Jonathan Conricus said, referring to the special forces unit affiliated with Iran's elite Revolutionary Guard.

The Syrian Observatory for Human Rights monitor reported that dozens of rockets were fired from Syria towards the Israeli-occupied Golan, without saying who fired them. It said the rockets followed a "first Israeli bombardment on the town of Baath" in Quneitra province.

A senior pro-regime military source in Syria confirmed the salvo of rockets, insisting Israel had fired first. Later, in the early hours of the morning, explosions were heard in Damascus, while live images were broadcast on television showing projectiles above the capital and several missiles destroyed by anti-aircraft systems.

Syrian state media said Israeli missile strikes had hit military bases as well as an arms depot and a military radar installation, without specifying where. The official SANA news agency said "dozens of missiles were shot down by anti-aircraft systems in Syrian airspace", acknowledging a number had reached their targets.

Israel's military later confirmed it had carried out the raids, saying some 70 military and intelligence targets had been struck and all of its aircraft had returned safely.

Israel had been bracing for a possible Iranian "revenge" attack after the Islamic Republic accused the Jewish state of having attacked one of its bases in Syria on April 9 in which nine Iranian commanders were said to have been killed. Tehran accused Israel of having carried out the attack but Israel, as per its known policy, did not accept or deny any responsibility.

On the other hand, Israel has been constantly stressing that it will take all necessary steps to prevent Iran from setting up "forward bases" in Syria to be used to attack the Jewish state. "Yesterday I delivered a clear message to the Assad regime: Our action is directed against Iranian targets in Syria. However, if the Syrian military acts against us, we will act against it. This is exactly what happened yesterday – Syrian military batteries fired surface-to-air missiles against us and, therefore, we attacked them," Netanyahu said.

The IDF "suffered no casualties", either on the ground or in the air, and that no rockets fired from Syria made any impact in Israeli territory, a spokesman said, adding that "all of our planes returned home safely".

As tensions escalated, especially in its northern region bordering Syria, the Israeli Premier called upon the international community to prevent "the Iranian Al-Quds force from establishing itself in Syria". "We need to unite in order to cut off its spreading tentacles of evil there and everywhere," he said. "I repeat: Whoever hurts us – we will hurt them sevenfold, and whoever is preparing to hurt us – we will act to hit them first. This is what we have done and this is what we will continue to do," Netanyahu said in the statement.

(The above story first appeared on LatestLY on May 11, 2018 02:44 AM IST. For more news and updates on politics, world, sports, entertainment and lifestyle, log on to our website latestly.com).