According to Karan, the main focus of the Yash Johar Foundation is to improve the quality of life of people in the entertainment industry. 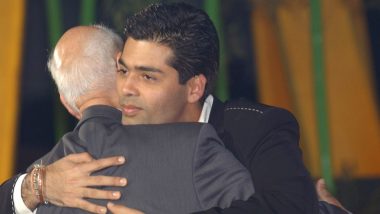 Filmmaker Karan Johar on Friday launched a foundation in the memory of his late father Yash Johar. According to Karan, the main focus of the Yash Johar Foundation is to improve the quality of life of people in the entertainment industry. Announcing the news on his Instagram account, he wrote, "This has been a true labor of love created in memory of my incredible father and to carry forward his legacy. I am proud to launch the Yash Johar Foundation, which has been set up with the aim to improve the quality of life for people in the Indian entertainment industry." Rajkumar Hirani, Karan Johar Team Up For Change Within Initiative, Vaccination Drive For Cine Employees.

Along with it, Karan posted a video featuring pictures of his late father, who was also a filmmaker. He added, "While we have initiated the implementation of long-term sustainable plans that will enhance the lives of people and their families in the industry, we have also ensured that immediate solutions are being provided to help them deal with the effects of the on-going global pandemic." A voiceover in Karan's voice can also be heard in the clip. 365 Days Star Michele Morrone Approached by Karan Johar For a Dharma Project: Reports.

"From spot boys to cameramen, from editors to actors, several people made up his world. My father was an empathetic person, who understood that being in movie business was hard.. Which is why it gives me great pleasure to announce the formation of the Yash Johar Foundation for the people of the entertainment industry," Karan said in the video. Financial, well-being, health and education and vocational training are the three main pillars that will be supported by the foundation.

"Considering the current scenario, we are taking into the accoun the effects and after-effects of Covid-19. We have initiated YJF Covid Response 2021 to address immediate needs such as food, shelter and medicines of those within the entertainment industry who have been negatively impacted by the pandemic. My father was a man who always looked for solutions and always taught me to look for them too. This is a step in that direction," he concluded.

Members of the film industry have lauded Karan for his initiative. "Thank you Karan," actor Dia Mirza commented. "So Noble," actor Neha Dhupia wrote. Meanwhile, on the directorial front, Karan will come up with a multi-starrer film, 'Takht'.