Ramadan 2022: How Muslims Celebrate Iftar Around the World

Other special dishes that are a must during Ramzan include sheer berenj and firni made from milk and rice, ash reshteh, a thick vegetable soup and a dish made from rice and lentils called adaspola. Iranians also make a saffron-flavoured halwa. 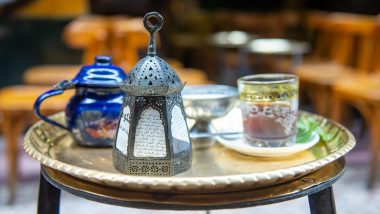 New Delhi, April 9: The ninth month of the Islamic calendar is known as Ramzan and it's celebrated globally by Muslims. This Holy month is considered a time for fasting and introspection and to get together for a meal with family and friends. The meal that is eaten before sunrise is known as Sehri, while the night feast that marks the breaking of the fast is called Iftar.

Traditionally, the fast is broken with dates and water followed by a light and nutritious meal. However, there are also some special dishes made only during Ramzan and enjoyed at Iftar get-togethers. Around the world, each culture has its own Iftar customs and traditions. Let's have a look at some of the unique ones below.

The tradition of breaking the fast that is kept from morning to night is done by eating dates, Arabic coffee, soup, and fried or baked stuffed pastry along with several other dishes. One of the traditional dishes in the Western region of Saudi Arabia is foul and tameez, which is a combination of fava bean stew and tamees bread.

In the eastern province, people break their fast with meat and vegetable stew known as saloona. The most famous Ramzan sweets in Saudi Arabia are Kenafa with cream, Qatayef with cream and Basbusa. Ramzan 2022 Time Table: Sehri and Iftar Timings for 8th Roza of Ramadan on April 10 in Mumbai, Delhi, and Lucknow.

Iftar is usually held at the house of the family's eldest member and streets are decorated with lanterns hung on the doors of each house. Most Egyptian families break the fast with a dish prepared from foul medames which is eaten with brown bread. As beans are healthy and not heavy on the stomach hence, in most homes they are mixed with hot oil, salt and pepper, but some people prefer to cook them with onion and tomatoes.

Egyptians also make some special drinks called qamar al deenandarasyi, which is made from dry apricots that have been soaked all day. It's a delicious and healthy way to break the daylong fast. Another Ramzan speciality is the crescent-shaped bread or khaboos.

Fantastic stews, sweets, fresh dates, traditional Azari cheese with vegetables and nuts accompanied by a glass of tea to wash them down are what one can find on any dinner table in Iran during Ramzan.

Other special dishes that are a must during Ramzan include sheer berenj and firni made from milk and rice, ash reshteh, a thick vegetable soup and a dish made from rice and lentils called adaspola. Iranians also make a saffron-flavoured halwa.

Preparations for iftar commence about three hours beforehand, in homes and at roadside stalls. The fast is broken by eating dates, or simply by drinking water if dates are not available. Savouries such as jalebis, samosas and pakoras are also served during Iftar.

Several restaurants also offer iftar meals during this time. Right after Iftar, Tawarih, an 8 or 20 rakat Muslim prayer, takes place which is followed by people flocking to the local bazaar for the ChaandRaat festivities. Ramzan 2022: How People Manage Fasting and Praying at Workplace.

Night markets are also popular dining spots after sunset, open to all, serving the masses as they break the daylong fast with affordable street food feasts.

So feast and indulge in your favourite iftar delicacies this Ramzan as it is very important to replace the energy lost during the day and to start the next day of fasting well-hydrated.