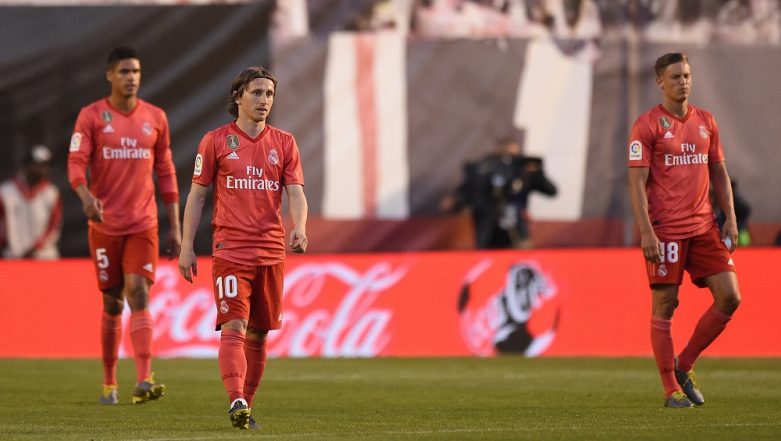 Adri Embarba's penalty, given after consultation with VAR, was enough for Rayo, who move to within six points of survival, with three games left to play. For Madrid, the gap widens between them and Barcelona, whose players had been dancing on the pitch at Camp Nou the night before and posing for photos with their children after wrapping up a fourth La Liga title in five years. Barcelona Takes a Dig at Real Madrid’s Luka Modric for Pulling Lionel Messi’s Jersey.

Zidane took over knowing Madrid's challenge was all-but extinguished but the difference on Barca then was 12 points while catching Atletico Madrid still seemed achievable. Atletico are now nine points ahead and the way Madrid are closing out this season will surely be a cause for concern.

Not since March 31 has anyone except Karim Benzema, out with a hamstring injury, scored for them in La Liga and they created precious few chances against a Rayo side that had conceded 62 goals this term. No side in the division has shipped more. Zidane said last week that the league would be the club's first priority from August but, even with new signings and fresh motivation, it could prove difficult to flick the switch. Madrid's winning habit has long-been lost.

Rayo's last victory over Real at Vallecas was in 1997, by the same scoreline, and this time they were without their top scorer too, Raul de Tomas, who is on loan from Madrid and ineligible to face his parent club. Zidane handed Gareth Bale another chance but he struggled to impress while Thibaut Courtois made his first start under the Frenchman, in ahead of Keylor Navas.

Rayo's Jose Pozo twice tested Courtois early on while Bale went through but saw his finish tipped over the bar by Alberto Garcia. In the 23rd minute, Rayo won their penalty as referee Pablo Gonzalez took advice from VAR before judging Jesus Vallejo to have hauled down Javi Guerra in the box. Embarba made no mistake.

Madrid wanted their own spot-kick when Mariano Diaz took a tumble from a corner but Gonzalez was unmoved, and the second half was surprisingly comfortable for Rayo. Bale's free-kick was palmed away by Garcia while Zidane threw on Brahim Diaz, Lucas Vazquez and Isco in search of some inspiration. It never came.

Beneath Madrid, La Liga's last Champions League spot remains up for grabs after Valencia, Sevilla and Getafe all endured surprise defeats earlier on Sunday. Valencia lost 1-0 at home to Eibar while Sevilla were beaten by the same scoreline away to struggling Girona, whose victory could prove crucial in their fight against relegation.

Both slips gave Getafe the opportunity to pull clear in the three-way race for fourth but they stumbled too, edged out 2-1 away to Real Sociedad. It means Getafe, Sevilla and Valencia have now managed only three wins between them from their nine fixtures in the last three rounds of the league.

Getafe stay ahead of Sevilla only on head-to-head, with Valencia three points behind and perhaps looking to the Europa League as their best hope of Champions League football next season. Valencia play Arsenal at the Emirates Stadium in the first leg of their semi-final next week, with a potential final to come against either Chelsea or Eintracht Frankfurt.