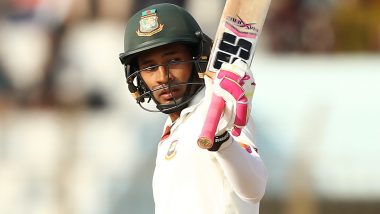 Dhaka, Feb 24: Mushfiqur Rahim became the leading run-scorer for Bangladesh in the Test Cricket. Rahim achieved the feat against Zimbabwe in the ongoing one-match Test series. The 32-year-old Rahim registered his third Test double century, surpassing the record of Tamim Iqbal. The wicket-keeper batsman Rahim so far has 4,413 runs in 70 Test matches while Iqbal has 4,405 runs in 60 matches to his credit. Zimbabwe Trail by 286 Runs Against Bangladesh in One-off Test.

In Dhaka Test, Bangladesh is in a strong position as they are just eight wickets away from the victory at Shere Bangla National Stadium. In second Innings, Zimbabwe's Brendan Taylor and Kavin Kasuza made it through to stumps on day three as the side ended the play on 9/2.

Mushfiqur Rahim and Mominul Haque's knock of 203 and 132 respectively powered Bangladesh side post a huge total of 560/6 in the first innings. Earlier, Skipper Craig Ervine's knock of 107 runs went in vain as Zimbabwe managed to score just 265 runs in their first innings.