Sonam was quick to respond, she wrote, "Don't ever leave (red heart emoji)".Sonam's husband Anand also left a few hug emojis in the comment section. Sonam celebrated her birthday on June 9. This year, Sonam had a low-key celebration with only a few family and friends around in London. 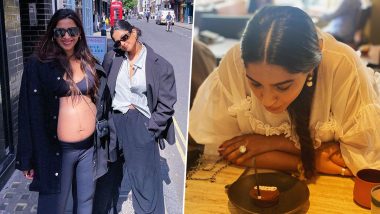 Sonam Kapoor and Rhea Kapoor are famously known as the powerful sibling duo of the industry. Both sisters are often seen praising each other in public, especially on social media where they both are often seen posting heart-warming, mushy pictures with each other. Sonam Kapoor Tries an Ice Cream From Rhea Kapoor’s Collaboration With Papa Cream, Tells Her Sister Which Flavour She Likes.

Rhea is currently in London and the 35-year-old producer recently took to Instagram to give a glimpse of her life with sister Sonam there. Rhea uploaded a carousel of photos and captioned it "London so far.." In the photos, Rhea seems to be having a lovely time with her close ones. From wearing a sheet mask in bed to savouring oysters, Rhea has delighted her fans with great visuals of her stay. In one of the photos, Sonam Kapoor could also be seen making a wish on a chocolate cupcake.

Sonam was quick to respond, she wrote, "Don't ever leave (red heart emoji)".Sonam's husband Anand also left a few hug emojis in the comment section. Sonam celebrated her birthday on June 9. This year, Sonam had a low-key celebration with only a few family and friends around in London.

Earlier, Rhea also posted a photo dedicated to Sister Sonam on her birthday.She wrote, "Happy birthday to the best. The original. The kindest. The iconic. The completely nuts. The most loving. My favourite human, ultimate sister and soulmate." Sonam's father Anil Kapoor also shared some throwback photos on his Instagram to wish her on her birthday. Anil Kapoor also shared his excitement about becoming a grandfather in the post. Sonam Kapoor Shares a Picture With Newly Married Rhea Kapoor, Says She Is Honoured To Be Her Sister.

He wrote, "Dear @sonamkapoor, If there's anything that makes up for not being able to celebrate your birthday with you this year, it's the anticipation that the next time we see you, we'll be that much closer to holding our grandchild in our arms! Parenthood is a see-saw between being happy for your children as they create their own lives and being sad that they're not always around you anymore....you'll see for yourself soon enough! Happy birthday my darling girl! We can't wait to see you, Anand and our little prince(ss) soon!"

On the work front, Sonam Kapoor will be next seen in a lead role in the upcoming thriller 'Blind'.