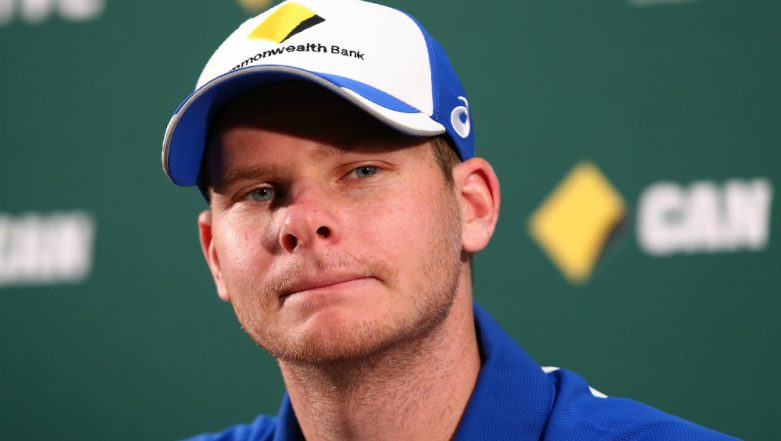 Sydney, December 21: Former Australia captain Steve Smith on Friday said he is desperate to recover lost ground ahead of next year's World Cup by competing in the IPL after being left so deflated by the ball-tampering scandal that getting out of bed became a struggle. Smith and former vice-captain David Warner were handed year-long international bans for their role in the ball-tampering scandal in South Africa in March which forced a review of Australia's cricket culture.

"Now the way the One Day game is played it's almost like an extended T20. So I think T20 cricket is a good way to prepare and the IPL is one of the best tournaments around the world," Smith said in his first press conference after the tearful breakdown following the return from South Africa. Steve Smith Banned From Playing BPL 2019 for Comilla Victorians Team, Former Australian Captain Likely to Address the Press December 21.

While serving his ban, Smith has participated in several T20 competitions, including in Canada and the Caribbean, in a bid to get play time. The IPL is scheduled to be held in April-May followed by the World Cup in England starting May 30. The 29-year-old plays for Rajasthan Royals in the IPL. Although Smith stepped down from captaincy in the wake of the ball-tampering scandal, he continues to be a part of the franchise. Steve Smith Falls Down While Facing Australian Pacer in the Nets (Watch Video).

"I was playing in the Bangladesh League, but I don't know what is happening there at the moment. After that I have the Pakistan League and then the IPL, which I think is adequate preparation for the World Cup, if I'm selected," Smith said. Asked about the nine months since the scandal, Smith said it was a difficult period but he has learnt to deal with it.

"I've had my ups and downs. There have been some dark days where I haven't wanted to get out of bed and things like that. But I've had a close group of people around me to help me know that it's OK," Smith said. "These ninth months have been a big learning curve for me, having a year out of the game has given me a time mentally refresh and get myself in a good headspace to go again," he added.

On what transpired in the dressing room during the infamous Newlands Test, Smith said it was a failure of leadership on his part. "In the room I walked past something and had the opportunity to stop it and I didn't do it. It went out and happened on the field," he recalled. "I had the opportunity to stop it rather than say I didn't want to know anything about it. That was my failure of leadership for that and I have taken responsibility for that," he said.

Smith was also asked about his thoughts on the ongoing India-Australia series. The batsman said it hasn't been easy to watch from the sidelines.

"...particularly when the boys haven't played their best in a couple of games. It's been hard watching and knowing that I can't go out and help them. But I was really proud of the way the boys played last week in Perth," he said referring to the second Test which Australia won by 146 runs to draw level in the four-match series.

"...I think Tim Paine's leadership has been exceptional since taking over as captain. He has obviously been faced with difficult circumstances to begin with but he has done a terrific job," he added.