Get latest articles and stories on Sports at LatestLY. The Minister, who was on a one-day visit to Kozhikode also felicitated and interacted with former and current athletes of the centre including prominent names like Padma Shri P T Usha and Tokyo Olympian Alex Antony. 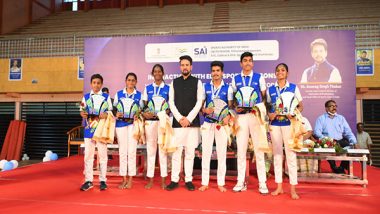 The Minister, who was on a one-day visit to Kozhikode also felicitated and interacted with former and current athletes of the centre including prominent names like Padma Shri P T Usha and Tokyo Olympian Alex Antony.

The ceremonial welcome was followed by demonstration performances of Kalaripayattu and Fencing and a short volleyball exhibition match between former and current SAI athletes.

"Standing on stage and speaking is too formal for me, I wanted to visit this Centre, sit in front of the players and coaches and talk to them as part of the family, rather than the sports minister. I want to take the right feedback from the players to know what is missing, and how they can contribute and achieve something in life and give back to the game," said Anurag Thakur in a statement.

Later on, the minister kept his word and interacted with local athletes, coaches and athletes that train or trained at SAI Calicut Centre and took their feedback on the centre and how it can be further improved.

"The Prime Minister met all the athletes that went to Olympics, Paralympics and Deaflympics at his residence and not just the ones who won medals, but everyone who participated; it was a rare opportunity and he is the only Prime Minister in the world to do so," said the Sports Minister.

"We are here directly to take feedback from the players and it is not behind closed doors, I am here personally to speak to the young players, experienced players and former players, to take feedback so that based on the right ones, we might be able to change something (for the better)," he added. (ANI)