Marian says that Djokovic, who won 6-7(6), 2-6, 6-3, 6-2, 6-4 to claim his second Roland-Garros and 19th Grand slam title, after going two sets down against Tsitsipas was because of the belief he built up in his victory over the Spaniard. 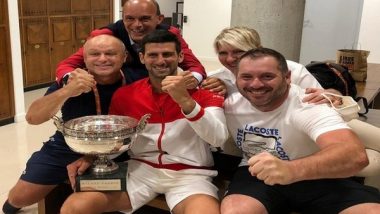 Paris, June 14: World No. 1 Novak Djokovic's long-time coach Marian Vajda believes that the confidence attained by the Serbian in the semi-final win against Rafael Nadal made all the difference in Sunday's French Open final against No.5 seed Stefanos Tsitsipas.

Marian says that Djokovic, who won 6-7(6), 2-6, 6-3, 6-2, 6-4 to claim his second Roland-Garros and 19th Grand slam title, after going two sets down against Tsitsipas was because of the belief he built up in his victory over the Spaniard.

"I think Rafa's game gave him a lot of confidence, believing in himself that he can win Roland-Garros," Vajda was quoted as saying to the official website. "First two sets it took him [a] little bit off [guard] because maybe he was thinking too much ahead. Then he was able to be present after first two sets. Then he just prevailed [with] his tennis." Novak Djokovic Defeats Stefanos Tsitsipas in Finals of French Open 2021, Serbian Ace Clinches 19th Major Title.

Vajda told reporters after the final that Novak was in a much better place mentally in 2021, compared to the 2020 final, when he was obliterated by Nadal in straight sets.

"I think he was much better than the last year mentally," he said. "Then I was also more calm because I see he found the game just before the Roland-Garros. He won the tournament in the hometown, Belgrade, that gave him a lot of good confidence before [coming] here."

With Sunday's victory at Court Philippe-Chatrier, Djokovic has now won the first two majors of the tennis season for the second time in his career and has become the first man in Open Era history to have won all four Grand Slams two or more times. Barbora Krejcikova/Katerina Siniakova Beat Bethanie Mattek-Sands/ Iga Swiatek In French Open 2021 Women’s Doubles Finals.

With the Tokyo Olympics this summer, Novak now would be aiming for a 'Golden Slam', something that only the legendary Steffi Graf has achieved.

"Obviously his goal and our goal is to win the Olympics and then win the Grand Slam," Vajda said. "That would be the absolute top of this year. But it's still far away from us. We have to still focus on the next one."