Sri Lanka batsman Bhanuka Rajapaksa has recovered from the left knee sprain and is available for selection for the third and final ODI against India on Thursday. 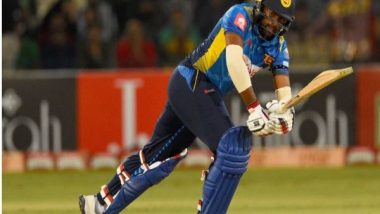 Colombo [Sri Lanka], July 22 (ANI): Sri Lanka batsman Bhanuka Rajapaksa has recovered from the left knee sprain and is available for selection for the third and final ODI against India on Thursday.

"Bhanuka Rajapaksa, who suffered a sprain on his left knee, has recovered. He will be available for selection for the 3rd ODI," Sri Lanka Cricket (SLC) tweeted.

Meanwhile, Sri Lanka have been fined 20 per cent of their match fees for maintaining a slow over-rate against India in the second ODI in Colombo on Tuesday.

Ranjan Madugalle of the ICC Elite Panel of Match Referees imposed the sanction after Dasun Shanaka's side was ruled to be one over short of the target after time allowances were taken into consideration, as per an ICC release.

Earlier, having helped India snatch victory from the jaws of defeat in the second ODI against Sri Lanka, pacer Deepak Chahar revealed how watching MS Dhoni finish games helped him plan his innings in Colombo on Tuesday.

"Watching MS Dhoni close out matches has been a big factor. I have watched him for a long period and I have always seen him finishing matches. When you talk to him, he always tells you to take the game deep. Everyone wants us to win, but when the match goes deep, it is thrilling for everyone involved," he said during a virtual press conference. (ANI)