Get latest articles and stories on Sports at LatestLY. Kolkata Knight Riders all-rounder Andre Russell has crossed 2,000 runs in the Indian Premier League (IPL) on Saturday. 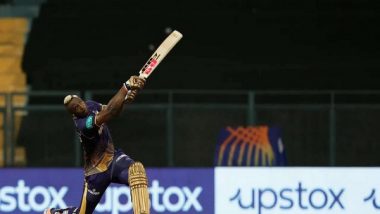 He also became the fastest batter in IPL to cross the landmark. He accomplished this feat during his side's match against Sunrisers Hyderabad at MCA Stadium in Pune.

During the match, he played a solid unbeaten knock of 49* in 28 balls, which included 3 fours and 4 sixes.

Russell has been having a solid IPL season so far, scoring 330 runs in 11 innings at an average of 41.25. His individual best score is 70*. He has scored one half-century in the tournament so far.

Coming to the match, a 63-run stand between Sam Billings (34) and Andre Russell powered Kolkata Knight Riders to a solid 177/6 in their 20 overs here at MCA Stadium in Pune on Saturday.