Get latest articles and stories on Sports at LatestLY. Rajasthan Royals Director of Cricket and Head Coach, Kumar Sangakkara praised pacer Obed McCoy for his commitment to the game, despite having an ailing mother back home. 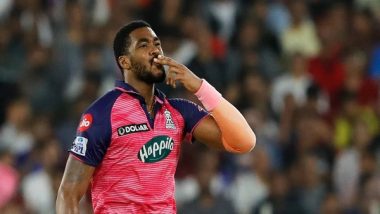 Ahmedabad (Gujarat) [India], May 28 (ANI): Rajasthan Royals Director of Cricket and Head Coach, Kumar Sangakkara praised pacer Obed McCoy for his commitment to the game, despite having an ailing mother back home.

Sangakkara's remarks came after RR registered a seven-wicket win over Royal Challengers Bangalore in the Qualifier 2 match of IPL 2022 here at Narendra Modi Stadium in Ahmedabad on Friday.

Also Read | IPL 2022: Sanju Samson Reveals, This Season for the Rajasthan Royals Is All About Shane Warne.

"The entire bowling unit has been fantastic. Special credit to Prasidh. The way he was honest with me was really impressive. He is a very special talent. Boult also looks to learn all the time. McCoy's mother has been recovering back in the West Indies but his commitment has been superb," said Sangakkara in a post-match presentation.

"Then the spin twins have been phenomenal. We want to spend 95 per cent of our purse, We did almost 8 months of work with our new investors. That has paid off. We avoided just looking at specific players. The core of our group is a group of seasoned international players," he added.

"His overall game is wonderful. He trusts his strengths. He is great against spin. He chooses which shots to play and which not to on a given day. He can accelerate anytime. He can change gears anytime and that is an exceptional talent," said Sangakkara.

Coming to the match, great knocks by Buttler and Yashasvi Jaiswal, followed by a cameo of Sanju Samson helped RR chase down the target of 158 runs in just 18.1 overs. Earlier, Prasidh Krishna and Obed McCoy scalped three wickets each to restrict RCB at 157/8.

Rajasthan Royals will lock horns against debutants Gujarat Titans in the final on Sunday. (ANI)