India has been recording more than one lakh cases for the past few days. 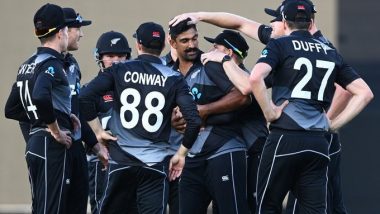 Wellington, April 9: New Zealand's travel ban from India starting Sunday could impact its cricketers playing in the IPL and force them to fly straight to the UK for the two-Test series against England in May-June, followed by the World Test Championship final. Captain Kane Williamson, pacers Trent Boult and Kyle Jamieson are among the 10 New Zealand players taking part in the IPL beginning on Friday.

"We're monitoring the situation and are in contact with the IPL franchises to keep the lines of communication open, because the tournament's due to go for some time," Richard Boock, NZC's public affairs manager was quoted as saying by 'New Zealand Herald'.

New Zealand Prime Minister Jacinda Ardern on Thursday announced an April 11 to 28 ban on arrivals from India in the wake of rising COVID-19 cases in the country. Rishabh Pant Hilariously Trolls Sam Billings Ahead of CSK vs DC, IPL 2021, Says ‘Someone’s Not Hitting’ (Watch Video).

"We're prepared to discuss all contingencies, if the situation warrants. For argument's sake, if it occurred with one of the test players, it might make more sense for them to continue on to England (for the test tour and world championship final)," Boock added.

New Zealand play two Tests in England between May 25 to June 14, followed by the WTC final against India from June 18. India has been recording more than one lakh cases for the past few days.

"Ultimately these decisions around travel into high risk countries generally will come down to individuals, but also if it's a workforce, their employers. So those are judgements they need to make," Ardern said.