The 35-year-old has been a stalwart of the Test side since debuting in 2009 as an opening batsman, going on to establish himself as a world-class keeper-batsman and claiming numerous records in his 73 Tests to date. 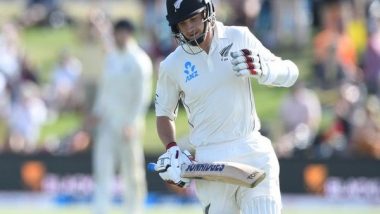 Auckland, May 11: New Zealand Cricket (NZC) on Tuesday announced that wicketkeeper-batsman BJ Watling will be retiring from international cricket after the tour of England.

The 35-year-old has been a stalwart of the Test side since debuting in 2009 as an opening batsman, going on to establish himself as a world-class keeper-batsman and claiming numerous records in his 73 Tests to date.

With the BlackCaps contracts for the 2021-22 season due to be released on Friday, in which Watling will not be included due to his future unavailability, his retirement news was expedited. The Northern Districts gloveman had been pondering his options for a while, but settled on his decision to retire at the end of the just-completed home summer.

"It's the right time," said Watling, who has recently become a father for the second time. "It's been a huge honour to represent New Zealand and in particular wear the Test baggy. Test cricket really is the pinnacle of the game and I've loved every minute of being out there in the whites with the boys. Kevin Pietersen Requests People in India To Stay Safe in a Twitter Post in Hindi, Says ‘I May Have Left India but the Country Is in My Thoughts’.

Sitting in the changing rooms having a beer with the team after five days' toil is what I'll miss the most. I've played with some great players and made many good mates. I've also had plenty of help along the way for which I'll always be grateful," he added.

Talking about Tests against England and the WTC final against India, Watling said: "Although I've had to make this announcement ahead of the tour to England, my focus is very much on the three Tests ahead and preparing to perform in them."

"This tour will be a challenge on a few levels and we know as a team we will need to be at the very top of our game if we want to succeed," he added. Watling holds the New Zealand Test dismissals record with 249 catches (excluding 10 as a fielder) and eight stumpings - the best numbers of any current Test keepers.

His bowler-keeper catching combinations with Tim Southee (73), Trent Boult (55), and Neil Wagner (53) occupy the top three spots on the New Zealand record list. Watling's batting statistics are equally eye-catching: with eight Test centuries to his name and New Zealand records for the fourth and fifth-highest partnerships: 362 with Brendon McCullum against India at the Basin Reserve in 2014, and 365* with current captain Kane Williamson against Sri Lanka at the same ground a year later.

He is just the ninth Test keeper to score a double hundred and was the first to do so against England, when his Player of the Match performance helped win a dramatic Test against England at Bay Oval in November 2019. He also featured in another New Zealand record-partnership in that match as he and Mitchell Santner put on 261 for the seventh wicket. New Zealand coach Gary Stead paid homage to his side's Mr. Dependable behind the stumps.

"BJ is a wonderful player and a great bloke. He works really hard on his game to get improvements and always puts the team first. You just have to look at the respect he's held in by his teammates and the opposition to appreciate his standing in the game," said Stead.

"The records speak for themselves and he's been such a crucial cog in the Test team's rise over the past decade. That double hundred he scored at the Mount in 2019 was one of the best innings I've ever seen and epitomised BJ Watling as a player, really," he added.

If Watling plays all three Tests on the upcoming tour, two against England (June 2-6 and 10-14) and the ICC World Test Championship Final against India on June 18-22, he will surpass Adam Parore's record of most Tests as a New Zealand keeper at 67.

Watling played his entire domestic career for Northern Districts featuring in 91 First-Class matches, 62 T20 games, and 90 List A fixtures for the Major Association.