The stadium is oval in shape and as a result, whenever a match is played on any of the 11 pitches, the boundary size will remain the same on both sides. 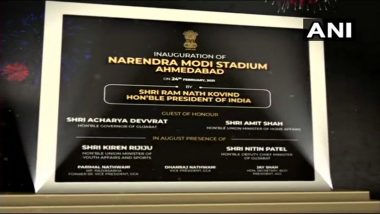 Ahmedabad, February 24: President Ram Nath Kovind on Wednesday inaugurated the newly-built Motera Stadium which was renamed the Narendra Modi Stadium ahead of the pink-ball Test between India and England. Home Minister Amit Shah and Union Minister for Youth Affairs and Sports Kiren Rijiju were also in attendance on the occasion.

On February 24, 2019, the then President of United States, Donald Trump had visited Motera Stadium for the 'Namaste Trump' event, and exactly one year later, the newly-built stadium will now be hosting its first international cricket match.

The stadium is the biggest cricket stadium in the world as it has a total capacity of 1,32,000 and all the facilities have been taken care of. The stadium is oval in shape and as a result, whenever a match is played on any of the 11 pitches, the boundary size will remain the same on both sides. Shadow mapping was also done before the construction of this stadium and as a result, no shadows would be seen during the twilight period.

The SVP Sports Enclave will be one of its kind international-level integrated sports infrastructure spread over 215 acres. It will be one of the largest contiguous and multi-sports facility in the country. The entire facility will offer venues for over 20+ Olympic Games such as athletics, badminton, football, aquatics, basketball and many other indoor and outdoor sports.

The sports enclave will also have a 15,000 capacity field hockey stadium and a 50,000 seat athletics-football stadium with a 400m track. A 5,000 capacity tennis stadium would also be there along with 12 additional tennis courts. Motera Cricket Stadium Renamed as 'Narendra Modi Stadium’, Inaugurated by President Ram Nath Kovind in Ahmedabad.

A total of 93,00,000 square feet of built space is proposed and the Sports Enclave will also be able to host about 2,50,000 visitors during an event day.

Earlier, Rijiju had said that the newly-built Motera Stadium is not just the largest, but it is also one of the best stadiums in the world.

"I went to see the Motera Stadium, I tried to understand everything virtually, be it the size, design, or structure. I can say that the Motera Stadium which is the largest in the world, is not just the biggest, but is one of the best stadiums in the world. The facilities for the spectators and players are top-notch. This is not only the largest but it is one of the best stadiums in the world. I am very proud that our country has such a stadium. I thank Prime Minister Narendra Modi for conceptualising this stadium and then I thank Home Minister Amit Shah for ensuring that the stadium has been constructed within 2.5 years," said Rijiju while talking to select media in Ahmedabad.