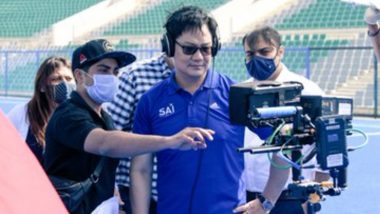 New Delhi, April 1: With the Tokyo Games a little more than three months away, Sports Minister Kiren Rijiju has held a review meeting with the top officials of Indian Olympic Association (IOA) and National Sports Federations regarding the preparations of the athletes.

Tokyo Olympic can be beginning of a new era for Indian sports. I'm happy to be part of the campaign #HumHongeKamyaab with @SonySportsIndia

Govt will provide full support to make Olympic journey a memorable one for every athlete.

It has been learnt that during the meeting, a periodic review was taken about Indian athletes' preparation for the Tokyo Games, which is scheduled to be held from July 23 to August 8. According to sources, the matter of COVID-19 vaccination of India's Olympic-bound athletes was not discussed during the meeting.