Rani is the obvious choice not just for her on-field exploits but also for her innate ability to guide the youngsters in the team. 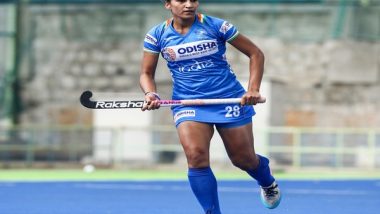 New Delhi, June 21: Hockey India on Monday named veteran striker Rani as the captain of the 16-member Olympic-bound women's hockey team. Rani is the obvious choice not just for her on-field exploits but also for her innate ability to guide the youngsters in the team.

Under Rani's captaincy, the Indian team over the past four years has achieved significant results including winning the Asia Cup in 2017, winning Silver at the Asian Games 2018, Silver at Asian Champions Trophy 2018 as well winning the FIH Series Final in 2019. Ashok Kumar, Indian Referee, To Officiate Wrestling Bouts at Tokyo Olympics 2020.

The team led by Rani also made it to the quarterfinals of the FIH Women's World Cup 2018 in London for the first time. She was the cynosure of India's performance during the FIH Olympic Qualifiers in Bhubaneswar where her goal put the team ahead by 6-5 against the USA to secure the qualification.

Hockey India also announced defender Deep Grace Ekka and experienced goalkeeper Savita as the two vice-captains of the women's team. Congratulating all three players named for their leadership roles, Indian women's team chief coach Sjoerd Marijne said, "I congratulate Rani on being named the captain of the Indian women's hockey team for the Olympic Games Tokyo 2020. I also congratulate Deep Grace Ekka and Savita on being named the vice-captains of the team."

"All these three players have been part of the leadership group for a long time and have proven their abilities with this added responsibility and have guided many youngsters in the Core Group. Having two vice-captains will also strengthen the core leadership group for the future. Their experience and role will be of importance as we aim to achieve good results in Tokyo.

"It has been a long journey for the team and we continue into a tough challenge at the Olympics. The team needs to be mentally strong and I am confident with these three players at the helm, they are headed in the right direction."

Expressing her gratitude on being named captain, Rani said, "It is a huge honour to lead the Indian Team at the Olympic Games Tokyo 2020. In these past years my role as a captain was made easy with teammates who have shared the responsibilities as senior players."

"I look forward to this added responsibility and thank Hockey India, coaching staff and selectors for this honour," she added.