Greece's Stefanos Tsitsipas on Friday managed to progress to the men's finals of the ongoing French Open. 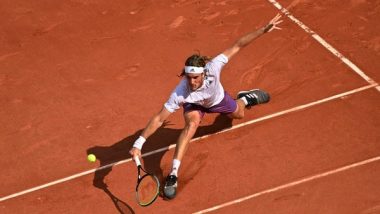 The first two sets were won by Tsitsipas as he clinched it 6-3, 6-3. Greece's tennis star brought out his A-game to the middle and Zverev had no answers to what was thrown at him.

However, Zverev staged a comeback in the third and fourth sets as he won both by margin of 6-4 and as a result, the match was sent into the fifth and deciding set.

However, in the end, it was Tsitsipas who managed to progress to the finals as he won the fifth and final set 6-3.

Later in the day, Rafael Nadal and Novak Djokovic will lock horns in the semi-finals of the ongoing French Open. (ANI)