Get latest articles and stories on Sports at LatestLY. Australia captain Meg Lanning said the Women's Ashes against England is not going to be an easy game but her side is looking forward to win the series. 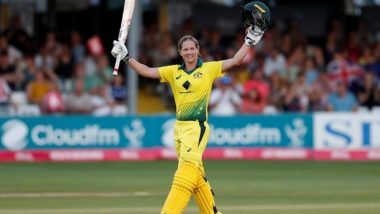 Canberra [Australia], January 26 (ANI): Australia captain Meg Lanning said the Women's Ashes against England is not going to be an easy game but her side is looking forward to win the series.

Australia won the first T20I of the Women's Ashes but the remaining were washes out due to rain. Both the sides will now be facing each other for the Test match on Thursday.

Also Read | ECB Partners With 'Kick It Out' To Tackle Racism and Discrimination in Cricket.

"We're coming here to win. There's no doubt about that. That's all we've spoken about over the past few days is coming here and how can we best set up a victory. England are coming to do the same thing," ESPNcricinfo quoted Lanning as saying.

"So it's certainly not going to be easy, and we're going to have to sort of grind it out through certain periods of the game, but that's the way we're approaching it," she added.

On the other hand, England skipper Heather Knight feels that the team which bowls first, always gets an uper hand in the game.

"There's a line of thought that if you bowl first you can dictate the game a little bit more, you still have to take 20 wickets but hopefully you have a chase at the end," said Knight.

After the Test match, Australia and England will be squaring off for the ODI series which will kick start from February 3 and will end on February 8. (ANI)