Get latest articles and stories on Sports at LatestLY. Clinical knocks by batters and a four-wicket haul by Pooja Vastrakar guided Supernovas to a 49-run win against Trailblazers in the opening match of the Women's T20 Challenge here at the Maharashtra Cricket Association Stadium in Pune on Monday. 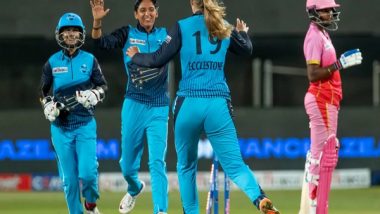 Pune (Maharashtra) [India], May 23 (ANI): Clinical knocks by batters and a four-wicket haul by Pooja Vastrakar guided Supernovas to a 49-run win against Trailblazers in the opening match of the Women's T20 Challenge here at the Maharashtra Cricket Association Stadium in Pune on Monday.

Chasing a challenging 164-run target, the highest ever total in the Women's T20 Challenge, Trailblazers got off to a decent start with captain Smriti Mandhana and Hayley Matthews putting on 39 runs for the opening wicket. Pooja Vastrakar dismissed Hayley Matthews caught behind for 18 off 14 balls.

Jemimah Rodrigues then joined her skipper Mandhana to take her team's total beyond 50-run mark in 6.1 overs. The southpaw Mandhana was then dismissed by Vastrakar for 34 off 23 balls as Trailblazers lost their second wicket for 63.

In the same over, Vastrakar dismissed Sophia Dunkley for 1 as Trailblazers lost their third wicket for 65.

After that, there was a complete collapse as Sharmin Akhter was sent packing for a duck by Alana King. Sophie Ecclestone then dismissed Richa Ghosh for 2. In the next over, she dismissed Arundhati Reddy for a golden duck stumped by wicket-keeper Taniya Bhatia as Trailblazers lost their sixth wicket for 72.

Salma Khatun, too, was dismissed for a duck as Vastrakar got her fourth wicket. Jemimah Rodrigues, the lone batter fighting from the other end, was also dismissed for 24 to leave Trailblazers tottering at 86/8.

Alana King then dismissed Poonam Yadav for 7 as Trailblazers lost their ninth wicket for 94. Renuka Singh and Rajeshwari Gayakwad took their side beyond the triple-figure mark but that was not enough as they could only score 114/9 in 20 overs, losing the match by 49 runs.

Earlier in the day, Skipper Harmanpreet Kaur top-scored for Supernovas with a knock of 37 while Harleen Deol played quick innings of 35 off 19 balls. Openers Deandra Dottin and Priya Punia also played good knocks of 32 and 22 respectively.

The first and huge breakthrough for Trailblazers came in the 5th over off Arundhati Reddy. Opener Deandra Dottin was run out by Sharmin Akhter after the fielder castled the stumps directly.

In the second over after the powerplay, Hayley Matthews uprooted the wickets of Priya Punia. Supernovas opener got beaten to the delivery attempting a pull and the ball shattered the stumps.

Skipper Harmanpreet Kaur then joined Harleen Deol on the crease as the duo started clocking runs for Novas at a rapid pace. 90/2 was the score at the end of the first half of the innings.

On the first delivery of the 12th over, 100 came up for Supernovas after Harleen Deol paddle swept the ball past the keeper for 4 runs. But on the very next ball, bowler Salma Khatun had the last laugh as she trapped Harleen in front of wickets for LBW.The new batter on the field, Sune Luus never got going as Rajeshwari Gayakwad removed her in the 15th over. On a flighted delivery, Sune Luus drove the ball aerially toward the covers and found Renuka Singh.

Wickets kept falling for Novas as Salma Khatun got her second of the night in form of Alana King in the very next over. Skipper Harmanpreet smashed two boundaries off Rajeshwari Gayakwad in the 17th over as Novas score read 142/5 going into the final three overs of their innings.

Hayley Matthews leaked only seven runs in the 18th over. In the penultimate over Pooja Vastrakar and Harmanpreet Kaur were dismissed and 11 runs came out of it.The last over of the innings again saw Sophie Ecclestone, Meghna Singh, Chandu V losing their wickets as Novas failed to finish on high despite a good start. Supernovas ended their innings with 163 which is the highest of the tournament.