GT vs RR Preview: Likely Playing XIs, Key Battles, Head to Head and Other Things You Need To Know About TATA IPL 2022 Qualifier 1

Hardik Pandya's side faced a defeat in their last league game but despite that, they would have a lot of confidence as they enter this clash on Tuesday. Rajasthan Royals on the other hand, signed off their group stage campaign with a win and will be aiming to repeat a similar performance. 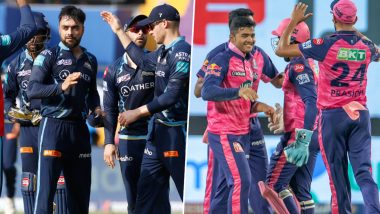 Gujarat Titans would be aiming to carry on their good form from the league stage to put up a solid show against a resilient Rajasthan Royals in Qualifier 1 of the IPL 2022 Playoffs on Tuesday, May 24. The match would be played at the Eden Gardens in Kolkata and is scheduled to get underway at 7:30 pm IST (Indian Standard Time). Hardik Pandya's side impressed one and all this season with superlative performances in all three departments of the game and are looking to be solid title challengers in their debut season. IPL 2022 Records a Total of 1000 Sixes, Highest in Tournament's History

Rajasthan Royals, on the other hand, ended their league stage campaign on a high with an impressive victory over Chennai Super Kings. They too will aim to go all guns blazing in this game. Earlier this season, they were outsmarted by Gujarat and they will aim to avenge that loss in the group stage. Rajasthan would also want their and the tournament's top-scorer Jos Buttler to regain form as the Englishman is crucial to their chances in the competition.

This is the second time that these two sides will face each other in the Indian Premier League. Gujarat Titans had emerged winners the last time these two teams had competed in the tournament earlier this year.

For Rajasthan Royals, Jos Buttler and Yuzvenrda Chahal, the Orange and Purple cap holders respectively, will remain the key players. Buttler might not be in form but he can be dangerous and can change the course of a contest on his day. For Gujarat, Mohammad Shami and Wriddhiman Saha--both of whom would be playing on their home ground, will be the key players.

The battle between Trent Boult and Shubman Gill would be very interesting to watch. Also, the contest between Jos Buttler and Lockie Ferguson would be something fans will be keen to watch.

(The above story first appeared on LatestLY on May 23, 2022 10:20 PM IST. For more news and updates on politics, world, sports, entertainment and lifestyle, log on to our website latestly.com).