Get latest articles and stories on Sports at LatestLY. Indian Boxers continued their impressive run as 2017 Youth World Champion Nitu (48kg) and 2019 Asian Championships bronze medallist Manisha (57kg) cruised into the quarter-finals at the 12th edition of the IBA Women's World Boxing Championships after registering contrasting wins in Istanbul on Saturday. 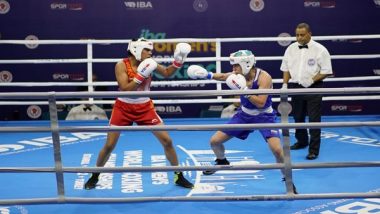 Manisha (In red) in action against Svetlana Staneva of Bulgaria in pre-quarters of Women's World Boxing Championships (Image: BFI media)

Nitu, who won the gold medal at the Strandja Memorial tournament in Sofia this year, was facing Spain's Lopez Del Arbol in the pre-quarterfinal bout. The boxer from Bhiwani dominated the proceedings right from the beginning and showed relentless energy, speed and footwork to land precise punches.

Nitu upped the ante in the next two rounds and carried on with her attacking approach without giving any chance to her opponent and won the bout convincingly by 5-0.

Her next opponent will be Kazakhstan's Alua Balkibekova in the quarter-final on Monday.

Manisha (57kg) prevailed 4-1 over Svetlana Staneva of Bulgaria in a hard-fought bout that saw both the boxers trade punches throughout the three rounds. Manisha held her nerves and secured the verdict of the judges in her favour in the end.

She will next face a tough challenge from Youth World bronze medallist Namuun Monkhor of Mongolia in the quarter-final on Monday.

On Sunday, 6 Indian boxers including Nikhat will be in action in the round-of-16 bouts.

Anamika (50kg) will square off against World Championships bronze medallist Kristy Lee Harris of Australia while Jaismine (60kg) will be up against Australia's Angela Harries.

This year's event, which marks the 20th anniversary of the IBA Women's World Championships, will be played till May 20.

In the last edition of the tournament, held in Russia in 2019, Indian boxers secured one silver and three bronze medals.

Indian boxers have won 36 medals, including nine gold, eight silver and 19 bronze, in the 11 previous editions of the tournament, which is the third-highest after Russia (60) and China (50). In the last edition of the IBA Women's World Boxing Championships, held in Russia in 2019, Indians concluded with one silver and three bronze medals. (ANI)